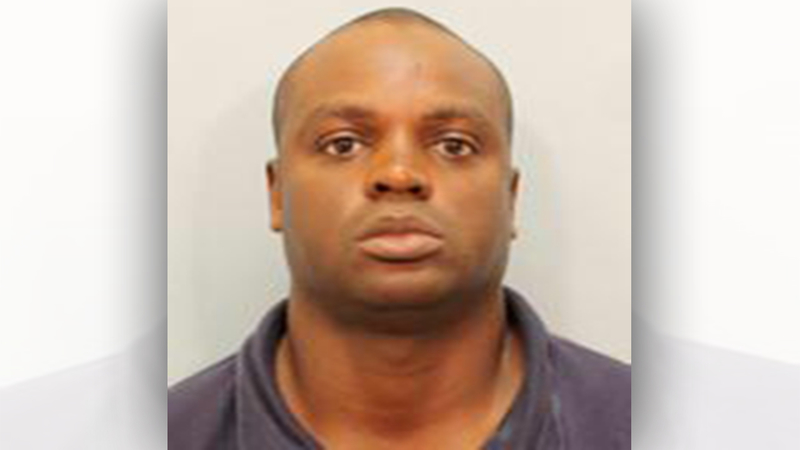 HOUSTON -- A suspect has been arrested and charged in last night's shooting death of a Harris County deputy.

At a press conference this afternoon, Harris County Sheriff Ron Hickman announced that Shannon J. Miles, 30, a person who had been in custody since early this morning, has been arrested and charged with capital murder.

Deputy Darren Goforth, 47, was killed in cold blood last night at a northwest Harris County gas station. He had left an accident scene at around 8:30pm when he stopped by a gas station on Telge and West Road. As he was pumping gas, detectives say Miles approached him from behind, said nothing and fired multiple shots. Once the deputy fell to the ground, authorities say Miles fired more shots. Deputy Goforth was pronounced dead on the scene.


Earlier today, Hickman, along with other county officials made a plea to the public for anyone who knows anything about the fatal shooting of Deputy Goforth to come forward. Asked at the second press conference, why he asked for the public's help if he already had someone in custody, Hickman said he had to be sure.

"We always want to make sure we leave no stone unturned because people who were at the scene who we have not talked to yet may have more details to help solidify our case," said Hickman.

Miles has a criminal history that includes Resisting arrest, trespassing, evading detention and disorderly conduct with a firearm.

In an earlier press conference, Sheriff Hickman called on anyone who might have any information on the shooting to come forward.

"From video retrieved form the location, we know that other individuals drove up to the service station as this incident was going on," said Hickman. "We ask them to come forward with information that will help us in this investigation."

An intense manhunt covered Harris County for hours late last night into this morning. At about 2:30am, authorities converged on a home on Crystal Lake in Copperfield, led there by a tip. The focus of the investigation is on the red pickup truck in the home's driveway. That's where the person of interest was found, and the truck towed. That person's identity has not been released.

The man's mother -- who didn't want to show her face or give her name -- told Eyewitness News her son didn't commit any crime. She said, "My son is innocent. I was in the house with him, so when that happened, my son was home."

Goforth was a 10-year veteran of the Harris County Sheriff's Office, assigned to the west district patrol. He leaves behind a wife who is a school teacher and two children.

"We have 5- and 12-year-old children who are left behind," said Rick Harley with 100 Cub. "The 30,000 members of the 100 Club will make sure those children have an opportunity to go to the college of their choice when the time is appropriate."

Harley added that if the sheriff needs it, Crime Stoppers and the 100 Club have teamed up to double the reward money in the case.

Goforth's brother-in-law, Stephen Allison, 46, told ABC News today Goforth was the "rock" in the family and "was just a solid individual."

Allison said Goforth didn't become a police officer until he was in his 30s and he loved his vocation. "He really felt the brotherhood in the community," Allison said. "It was his calling ... he wanted to spend his whole life in it once he got in it. ... He was kind of born for it."

Speaking of his death, Allison said "it was just something that you don't expect to ever happen."

He added, "You forget how dangerous that profession is."

"It strikes us all at the heart of public service," said Hickman, who vowed to hunt the suspect down. ""I've been in law enforcement 45 years. I don't recall another incident this cold-blooded and cowardly."

"It's an act of cowardice and brutality the likes of which I've never seen," said Anderson.

We've learned the non-profit, the 100 Club, is assisting Goforth's family. The 62-year-old organization said today they will give the family a $20,000 check to help with any financial needs. The organization added in a statement today, "Additional financial support for the dependent family, which averages $300,000 per tragedy, will be made after an assessment of their needs is conducted."