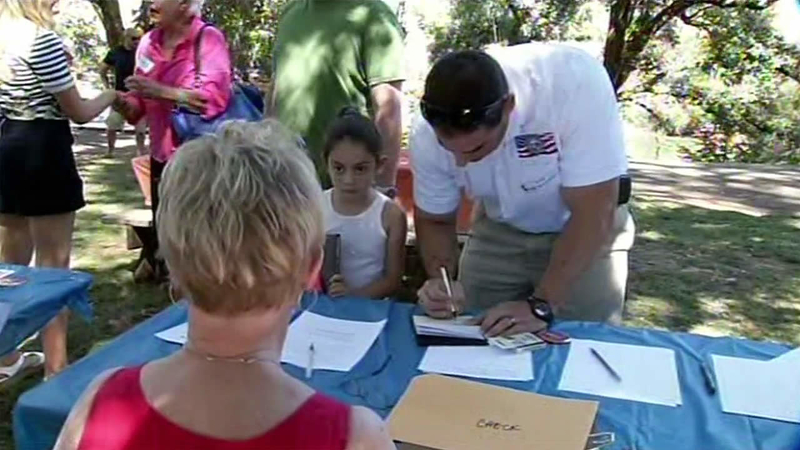 CALISTOGA, Calif. (KGO) -- More people returned to their homes Sunday after being evacuated because of the massive Valley Fire. Officials say the fire has burned 75,711 acres and is now 69 percent contained.

Cal Fire officials said 888 structures have been destroyed, with most of them being homes. That number could go up as a damage assessment continues.

Officials said three people have died in the fire.

Fundraising efforts were held to help those who have lost everything in the fire. People in wine country pledged hundreds of thousands of dollars to those affected by the fire.

The owner of a restaurant cooked the same pulled pork sliders he makes at his restaurant during a barbecue. Only this time, compassion is part of the recipe. "You just think about going home and not having a home. That's really frightening," Healdsburg Bar and Grill owner Douglas Keane said.

Keane joined Sonoma County restaurant owners and wine makers at a benefit to help those affected by the Valley Fire.

"My heart is definitely with my families and my home town," Bonnie Headley said.

Headley is volunteered her time just days after her childhood home burned in the Valley Fire. "It's crazy, I mean you just don't think it's going to happen to where you live," she said.

Kids are writing thank you cards to firefighters and support to those who survived. Abby Wetzel knows exactly what she's going to say. "It's hard for them to survive without a house or a tent or anything, so I think we should help donate dog food and stuff," Wetzel said.

Many people are doing more than that by writing donation checks. "If you've had a chance to be over there yet, it looks like a bomb went off," Sonoma Supervisor James Gore said.

Gore spearheaded the fundraising drive after seeing the devastation first hand. "You can't turn away from it and you can't be the person that says I hope something happens good, you got to take some kind of responsibility," he said.

Sunday's effort expected to raise $700,000 for #LakeCountyRising, which helps survivors and rebuilding efforts. "People that I've never met before that really probably have never been to Cobb or Middletown or Hidden Valley, probably never even been there and they've been touched by this event so much so they're willing to open up and give so generously" Lake County Supervisor Rob Brown said.

Brown is grateful for the donations and so is Headley. "There's always a silver lining and I think that this is going to be a huge opportunity for Lake County to come back even bigger than it was," she said.

Residents who are back home in Middletown have been told to boil their water rapidly for at least a minute.

For those blocked by road closures, not yet able to return home, there's plenty of food and assistance ranging from clean clothes to a clean cut. "I have a skill that I think makes people feel better and so I thought I'd come up and see if I could brighten somebody's day," hairstylist Dean Herrington said.

Free haircuts at Napa County Fairgrounds for those still not able to go home. pic.twitter.com/9uNDWGR664

And for those ready to return home .. Groceries to go pic.twitter.com/zpvscmZnvE

For most, anticipation looms on what will be left standing.

Michael Fern's anticipation is different. He's waiting to get into Loch Lomond, a suburb of Cobb.

"All of us who live in that area are desperately waiting for that closure to be lifted so we can go and find out friends," Fern said.

Have you seen this man? This is Rob Litchman. His friend tells me he is missing following the Valley Fire. pic.twitter.com/qPMF3d1elt

He says his friend, Rob Litchman, refused to leave when the fire broke. His home did not make it. "No one has seen or heard from Rob since the fires came through that area," Fern said.