The service was held on the eve of World Human Rights Day, with an emphasis on the importance of human connection.
KGO
By Amanda del Castillo 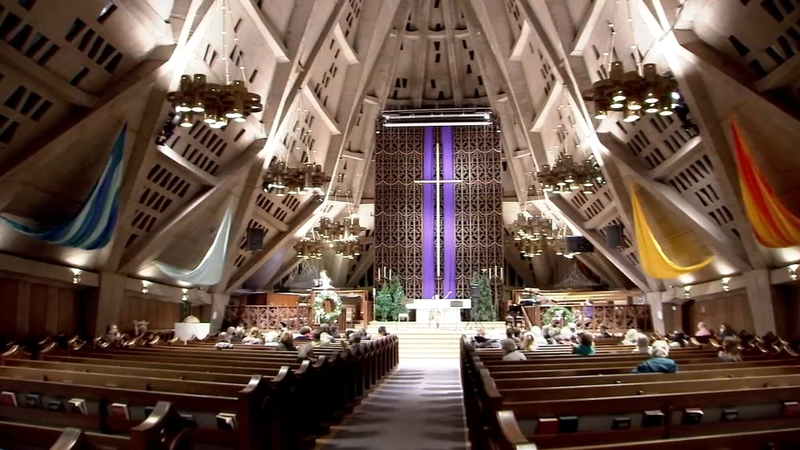 PALO ALTO, Calif. (KGO) -- On the eve of World Human Rights Day, dozens of multi-faith leaders met at First United Methodist Church in Palo Alto with the message: Hate is not welcome in Palo Alto.

"I think part of it is we name these things and don't try to pretend that things don't happen," Bruce Reyes-Chow with First Presbyterian Church of Palo Alto told ABC7 News. "You'll hear us name them, but not leave it there."

From vandalism, verbal attacks and violent, hate-based crime- the Multifaith Voices for Peace and Justice coalition behind the service said no group has gone unscathed.

"Anytime you don't know somebody, you are going to be afraid of them," Samina Sundas, founder of the American Muslim Voice Foundation said. "And anything you hear about them, you're going to believe."

She said that's why deeper connection is needed.

During the pandemic, ABC7 News has reported on racist graffiti discovered in a public bathroom, and even more was discovered at a downtown parking garage.

In August, ABC7 News highlighted a customer's racist tirade which was directed at the restaurant owner of Fuki Sushi.

Palo Alto Police confirm a hate investigation is underway after a customer at Fuki Sushi went on a racist tirade, directed at the restaurant's owner.

ABC7 News has also detailed the arrest of a man who police say was yelling anti-gay slurs and fighting with people downtown.

Without getting into specifics, Rabbi Amy Eilberg with the coalition and congregations Kol Emeth and Etz Chayim revealed the church itself- where the meeting was held- has been the recent target of a series of hurtful incidents.

"It's intentionally being held here because there has been hate activity here," she said.

Sundas added, "People are so separated. You know, they're well-to-do people, but they are not connecting the way they should be connecting and getting to know each other."

Getting to know each other is a suggestion given by many who spoke with ABC7 News about how to move forward.

"Part of living in a diverse community is having to do the hard work of learning about one another, engaging with one another," Reyes-Chow explained. "And the world would rather have us not do that work."

On the eve of World Human Rights Day, the dozens in attendance decided more must be done.

"It was time for words, for proclamations, for words of support and solidarity and mutual love," Rabbi Eilberg shared.