Eagle that fell from Milpitas nest released into the wild 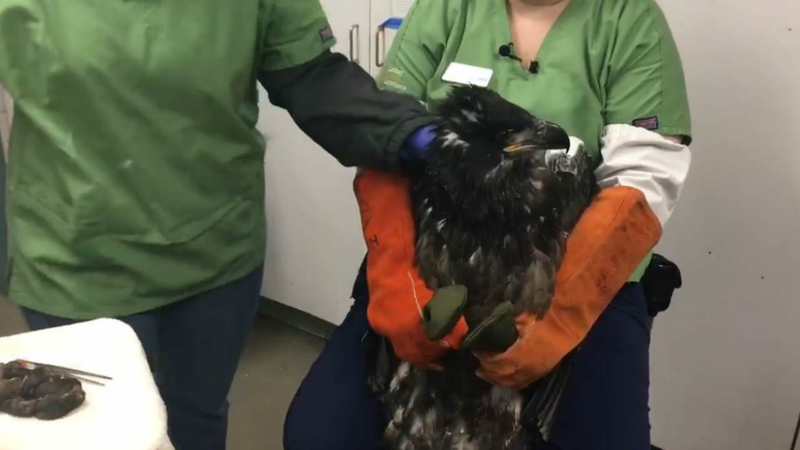 WALNUT CREEK, Calif. (KGO) -- A three month old baby bald eagle that fell out of its 70 foot tall nest on Sunday has been nursed back to health in Walnut Creek and released into the wild.

The vet called the eagle "Lucky." It's not known if the baby bald eagle is a boy or a girl. But a bruised wing was checked out by doctors after fish and game officials brought the raptor to Lindsay Wildlife Experience in Walnut Creek Monday evening. White bandages were on the top of its wings for protection.

Dr. Allison Daugherty said, "they saw him hit a branch on the way down. So they decided instead of putting him back in the nest to bring it to us. Because he became a little dehydrated we elected to get him some subcutaneous fluids. And so he got a little calories on board. We fed him some mice so he can have that in his system."

Lucky liked the mice and then got released into an aviary to stretch out his wings.

On Wednesday, the good news finally came down. "The eaglet was successfully released very early Wednesday morning. For the safety and welfare of the animal the location is not being disclosed at this time. It is imperative that this animal be left alone so it can have a chance in the wild," Lindsay Wildlife Experience Spokeswoman Elisabeth Nardi said.

Looking for bruising or bleeding on eaglet’s wings. #abc7news pic.twitter.com/4SzP6Q2N2h