KGO
SAN FRANCISCO (KGO) -- Coyote concerns at San Francisco's Stern Grove brought out a large group of pet owners Wednesday night after two dogs were attacked and one of them was killed.

A dog owner in Stern Grove shot video of a coyote and said there were at least three.

"They are bold. They followed me and my group of dogs around the park. They approach dogs in the park," said Wild Bill Peacock, a dog owner and videographer.

That bold behavior has led to the death of a dog named Buster, whose owner says he was killed by coyotes near the Pine Lake area of Stern Grove two weeks ago. A month earlier another owner says he was surrounded by five coyotes before they attacked his Bichon named Eddie. All of this has dog owners in the area nervous and asking what to do.

Gina Farr of Project Coyote says keeping coyotes wary by hazing or scaring them is the key.

"Arms over the head. Eye contact works. Advancing works," Farr said. "And then I say, 'Go away coyote! Go away! Go away coyote!'"

SF: Coyote expert calming fears after dog attacked by coyotes at #SternGrove. Some owners not buying it. pic.twitter.com/5Y8Od2nIML

Farr says noise makers are also a good tool to scare them off. But many fear the coyotes are becoming less fearful and more comfortable attacking small dogs.

"If you are on leash or attentive that can't happen. You can't stare at your phone anymore when you walk around the park," Peacock said.

"The risk goes down, way down when we know exactly how to act around coyotes," Farr said. 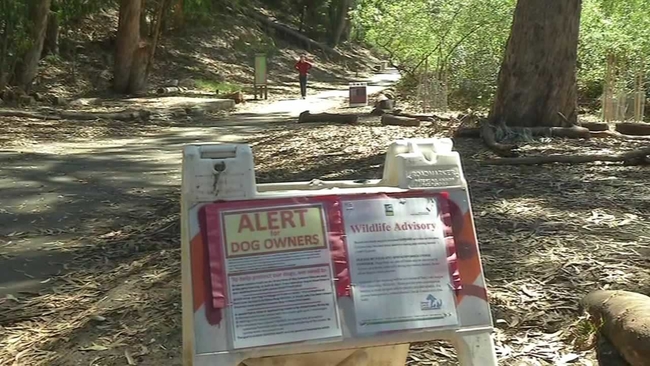