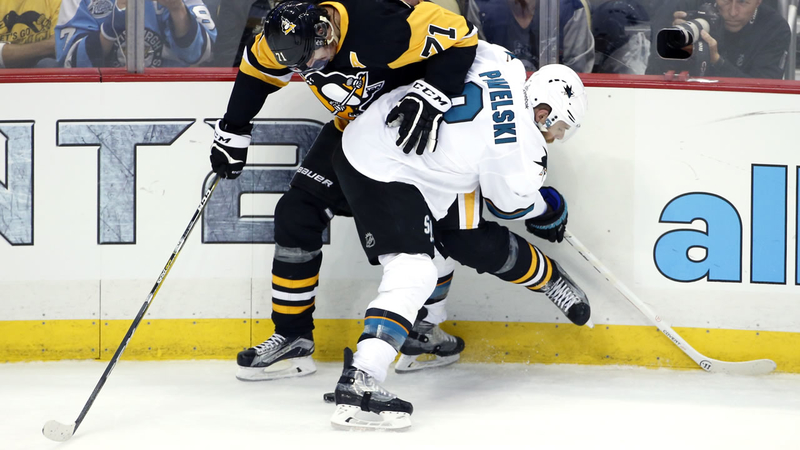 The seemingly endless barrage of shots the Pittsburgh Penguins threw his way. Pittsburgh's long-awaited house party more than five decades in the making and - most importantly - his team's breakthrough season from serving as mere fodder to a coronation for Sidney Crosby and company.

The San Jose Sharks goaltender made 44 saves, including all 31 over the final two periods in a 4-2 victory in Game 5 of the Stanley Cup Final on Thursday night. Outplayed but not outscored, San Jose will host Game 6 on Sunday after jumping on Pittsburgh rookie Matt Murray early and holding on behind the spectacular Jones late.

"This team hasn't quit all year and we're not going to start now," Jones said. "We still have a long way to go. It's still an uphill battle."

Logan Couture had a goal and two assists in the first period for the Sharks. Brent Burns, Melker Karlsson and captain Joe Pavelski also scored for San Jose, which was outshot 46-22 but held firm after surviving a chaotic opening five minutes and playing capably after getting the lead in regulation for the first time in the series.

Evgeni Malkin and Carl Hagelin scored for Pittsburgh but the 22-year-old Murray, whose postseason play helped fuel Pittsburgh's return to the final after a seven-year break, faltered early and his high-profile teammates struggled to get to Jones.

San Jose coach Peter DeBoer preached patience with his team in a hole only one club in NHL history has climbed out of to raise the Cup. He pointed to the Sharks' own first-round collapse two years ago against Los Angeles - when a three-game lead became a 4-3 loss that took an entire season to get over - as proof of how quickly the tenor of a series can change.

The Penguins stressed the final step in the long slog from the tumult of December - when Mike Johnston was fired and replaced with Sullivan with the team languishing on the fringe of the playoff picture - would be the most difficult. Yet the prospect of celebrating the first title captured within the city limits in 56 years sent thousands into the streets around Consol Energy Center and ticket were going for more than $1,000.

Things were no different inside, with the largest crowd in the arena's brief history - a group that included Pirates Hall of Famer Bill Mazeroski, whose epic ninth-inning blast in Game 7 of the 1960 World Series at Forbes Field marked the last time a championship season ended in Pittsburgh - in a frenzy from the opening faceoff.

It took all of 64 seconds for the Sharks to quiet them and 2:53 to leave them stunned. Burns' first goal of the final, a wrist shot from the circle that didn't look unlike Joonas Donskoi's overtime winner in Game 3, put San Jose in front in regulation for the first time in the series. Couture doubled San Jose's advantage less than two minutes later with a redirect in front of the net.

The momentum evaporated nearly as quickly as it appeared. Malkin scored on the power play 4:44 into the first and Hagelin followed 22 seconds later to tie it, the fastest opening four-goal sequence in the history of the final.

Things settled down - at least a little - until Karlsson's shot from in front with just under five minutes left in the first, set up by a pretty backhand feed from Couture.

The advantage set the stage for Jones, who spent a large portion of the second period fending off one odd-man rush after another as Pittsburgh's relentless speed pinned the Sharks in their end for long stretches. Yet the goalie who watched as a backup behind Los Angeles star Jonathan Quick two years ago as the Kings roared back to stun San Jose on their way to a championship gave the Sharks the spark they needed to extend their season for at least three more days and keeping its slim hopes of raising the Cup alive.