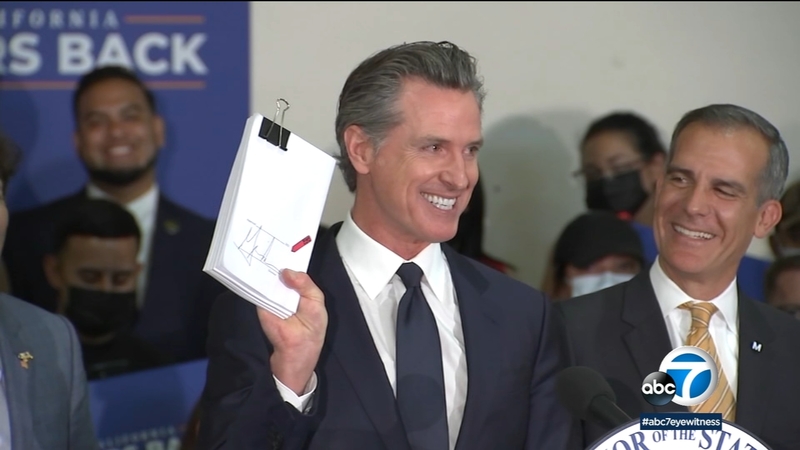 EL SERENO, Calif. -- Gov. Gavin Newsom on Tuesday signed a new California state budget that includes some $100 billion in spending and tax relief to help Californians recover from the pandemic.

The budget includes $12 billion in tax breaks and rebates that should benefit about three-quarters of the state's taxpayers, Newsom said. Many of those taxpayers will see rebates from $600 to $1,100.

It also includes programs to pay the back rent and utilities of people who were hardest hit by the pandemic; $4 billion in grants to help small businesses, funding for universal summer and after-school programs, and a $6 billion investment in broadband services for Californians.

Newsom said despite the economic hits of the pandemic, the state is projecting a budget surplus of at least $80 billion, a figure that is unprecedented for California or any other state.

"California is not only back, but California is once again asserting itself as the temple of the American economy," Newsom said.

Including the $100 billion "California Comeback Plan," the overall state budget involves about $263 billion in spending.

Gov. Newsom unveils new details about his $100-billion economic recovery package, which he has dubbed the "California Comeback Plan."

Under the tax rebate plan, taxpayers who earn up to $75,000 a year should see payments of $600, while qualified families with children will see an additional $500.

The payments are being made regardless of immigration status, Newsom noted.

"Regardless of your immigration status, we have your back," Newsom said. "We're proud of that. All Californians. We don't believe in leaving people behind."

The event at times seemed to be not just a budget signing, but a pep rally for Newsom, who is facing a recall election in September.

The field of candidates seeking to replace Newsom if he is recalled continues to grow. Roughly 90 people have expressed interest in running. They have until July 16 to file the paperwork to enter the election.

California will ban evictions for unpaid rent through the end of September and will use federal money to pay off eligible tenants' debt.

Newsom has been making sure Californians know about the cash payments and prize money he is doling out.

"Newsom is delivering money to your pocket," a narrator says over a video of a smiling family gathered on a couch in a campaign ad Newsom released last month, his first of the recall election. It references the $1,100 in one-time cash payments he proposed in his state budget.

The spot was one of three airing statewide on television, though the other two are negative, painting a dark picture of Republicans behind the effort. Their release followed two weeks of Newsom traveling the state as game show host, appearing at theme parks to award millions of dollars in prize money for vaccinations and to celebrate the end of most pandemic-related restrictions.