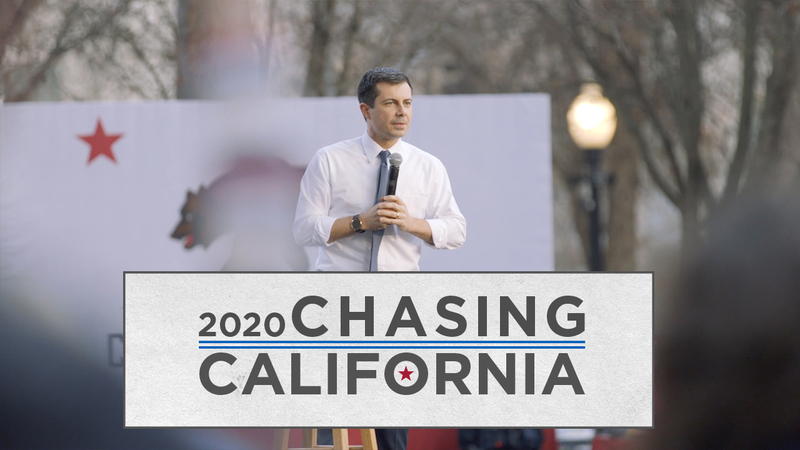 SAN FRANCISCO (KGO) -- After strong finishes in Iowa and New Hampshire, Mayor Pete Buttigieg is seeing momentum in his campaign and he's now turning his sights on California.

The South Bend, Indiana, mayor recently campaigned in Sacramento and Turlock, where he made his pitch to moderate voters -- many of whom said they were seeking an alternative to current front runner Bernie Sanders.

"Here's what I'm offering: A way to make sure that we deliver real solutions that can get done, that are bold and progressive, but not divisive," Buttigieg told ABC7 News in a one-on-one interview after his Sacramento rally. "It's time to leave the politics of the past in the past."

The challenge? The moderate vote remains split among likely voters.

According to a Public Policy Institute of California poll released this week, Buttigieg is in a near four-way tie for second place in the California primary. Sanders is in the lead with support from 32% of likely voters, followed by Joe Biden (14%), Elizabeth Warren (13%) and then Michael Bloomberg and Buttigieg (both 12%).

"Broadly speaking, it does sort of seem like the progressive wing of the party is coalescing behind Bernie Sanders, and the moderates are kind of looking for somebody they can unify behind," Jeremy White, politics reporter and co-author of POLITCO California Playbook, explained. "I think Buttigieg also sees California as a big state and thinks there are a lot of those more moderate voters that he has a chance to appeal to."

But Buttigieg -- who has 16 staffers in California -- still lags behind Sanders and Bloomberg in presence. Sanders has 100 staff members in the state; Bloomberg has spent millions on ads.

"I don't have the personal fortune of a billionaire or the email list you'd have if you've run for president before, and yet we have been able to go from nothing over the course of the last year to have success in the first two states," Buttigieg told ABC7. "And I believe we can do the same here in California."

A challenge for Buttigieg is his support among minority voters. According to a recent Quinnipiac poll, Buttigieg has 4% support from African American likely voters.

Tiffany Simms, an African American voter who attended Buttigieg's Sacramento town hall, said she is deciding between the moderate candidates and has some concerns about Buttigieg.

"I don't know that he's specifically addressing some concerns that are important to us," Simms said. "I mean, we still keep an open mind. There's no perfect candidate, but I would like to see him address some of those issues."

"I think a lot of black voters and voters of color want to have a sense that they know you and it can take years to earn that trust," Buttigieg said. "Obviously, I'm a little newer to the scene, but I welcome the challenge and the responsibility of reaching out to voters of color and making sure they see themselves not just in how this campaign is built, but in where we seek to take the country."

Michele Bosco is a Buttigieg supporter who attended his rally in Sacramento alongside her friend, Michelle Forbes, who is undecided.

Forbes then chimed in with her opinion.

"I am, what I consider moderate or center left, so for me Buttigieg is one of the options. Amy Klobuchar is also one of my options," she said. "I'm concerned about if we go too far to the left progressive."

Both Bosco and Forbes said they're concerned their vote for a moderate candidate will get split up.

"If we don't start having candidates get out of the race to make more room for that upfront candidate, so that we're not splitting up the moderate vote," Forbes said. "That's crucial."