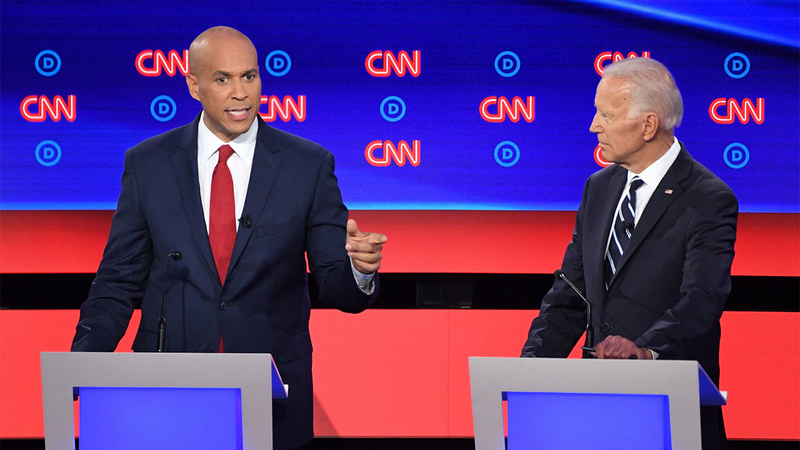 This month marked the five-year anniversary of Garner's death.

Pantaleo, who is white, placed Garner, who is black, in what prosecutors said was effectively a chokehold after Garner refused to be handcuffed during an arrest over the selling of loose, untaxed cigarettes.

Booker stopped speaking while the demonstrators were presumably escorted out of the room and resumed his remarks afterward.

Booker said: "We have serious problems in America. We have deep wounds and seriously deeply rooted challenges. We desperately need to heal as a nation and move forward because we know in this country our fates are united, that we have a common destiny. The call of this election is the call to unite and common cause and common purpose."

Over the next hour, New York Sen. Kirsten Gillibrand, California Sen. Kamala Harris and Julian Castro, the former mayor of San Antonio and housing chief during the Obama administration, all weighed in.

"He knew what he was doing, that he was killing Eric Garner, and yet he has not been brought to justice. That police officer should be off the street," Castro said.

For his part, de Blasio faulted federal authorities for declining to prosecute Pantaleo, and said he sympathized with Garner's family.

"Let me tell you, I know the Garner family. They've gone through extraordinary pain. They're waiting for justice and they're going to get justice. There's finally going to be justice," de Blasio said.