"We have seen a pattern with this administration which is they don't believe in science," Sen. Kamala Harris said.
KGO
By Kayla Galloway
SALT LAKE CITY, Utah (KGO) -- Climate change and the West Coast's deadly wildfires were a topic of discussion at Wednesday night's Vice Presidential Debate between Mike Pence and Sen. Kamala Harris, the incumbent saying both he and Donald Trump believe forest management needs to be "front and center."

"With regard to wildfires, President Trump and I believe that forest management has to be front and center, and even Gov. Gavin Newsom from your state has agreed, we have to work on forest management," Pence said.

Nearly 60 percent of California's forests are on federal land and more than 4 million acres of land has burned in the state this year alone, with two months left of fire season.

When asked during the debate whether man-made climate change has worsened wildfires and hurricanes in the U.S., Pence brought up the Trump Administration's record on the environment.

"Our air and land are cleaner than any time ever recorded and our water is among the cleanest in the world," the vice president said.

In her rebuttal, the California senator reiterated candidate Joe Biden believes in science, something the president has publicly questioned.

"We have seen a pattern with this administration which is they don't believe in science," Harris said.

This year we've seen record-setting wildfires and hurricanes, when the discussion of climate change surrounding that came up, here's what Vice President Mike Pence said.

Just last month during a visit to California, Trump said "I don't think science knows, actually," in reference to how climate change is affecting the state's now-annual wildfires.

Harris made reference to that statement by the president during Wednesday's debate.

"So let's talk about who is prepared to lead our country over the next four years on what is an existential threat to us as human beings," Sen. Harris said.

"You know, at some point, you can't, every year, have hundreds of thousands of acres of land just burned to the ground," Trump said Sept. 29.

This comes after the president previously stated the state should simply "clean" their "floors" to handle wildfires.

At that time, the president blamed the "years" of leaves and broken trees for the fires.

"The climate is changing. We'll follow the science," Pence said before shifting the conversation toward taxes.

Watch more of Wednesday's Vice Presidential Debate in the media player above. 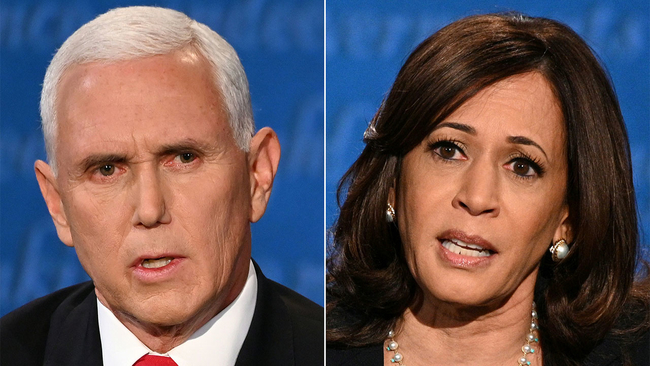