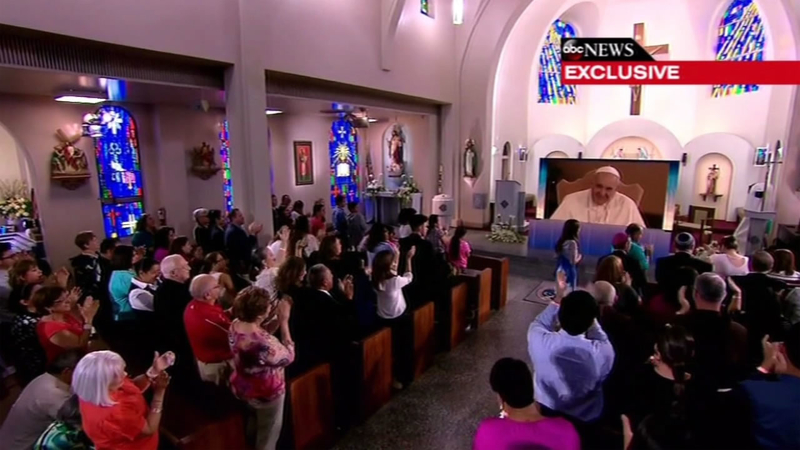 VATICAN CITY -- Pope Francis made history at the Vatican on Monday. He hosted the first-ever virtual papal audience, speaking online with Americans - including people right here in California.

In many parts of the world, 78-year-old Pope Francis has rock star status. He's the first Latin American Jesuit to lead the Roman Catholic Church.

Now the pope from Argentina is the first to hold a virtual audience via satellite with hundreds of people in Los Angeles, Chicago and McAllen, Texas, with ABC World News Tonight Anchor David Muir moderating at the Vatican.

A true honor. Our visit with Pope Francis @Pontifex on the eve of his historic visit to the U.S. pic.twitter.com/3Dcq0xi81A

This event comes just weeks before the pope's upcoming visit to the U.S.

The virtual audience lasted about an hour, as the pontiff engaged with individuals form three different groups.

The three groups were students at the Cristo Rey Jesuit High School in Chicago's inner city, congregants from a McAllen, Texas church near the U.S.-Mexico border and homeless men and women and families in Los Angeles.

The pope said it's important for him to meet with all of them, the citizens of the United States, who have history, culture, virtue, joy, sadness and problems like anyone else.

He heard stories of struggle, invoking tears, and gave immigrant children hope for a better future.

At one point, he asked a teenager in Chicago fighting tough personal battles to sing for him and she did.

"I guess I had to do it since it was the pope," she said.

This was a moment these young students say they'll never forget. "Nice to have him listen," one student commented.

Pope Francis even called directly on Sister Norma Pimentel, who helps immigrants in Texas. He told her he loved her.

"It was beautiful, and I think on behalf of everybody present because I represent all of us," Pimentel said.

In the end, crowds left chanting, "I see it, I feel it, the pope is here."