The e-mails obtained under the California Public Records Act show multiple things the county tried to hide about the major mishap.
KGO 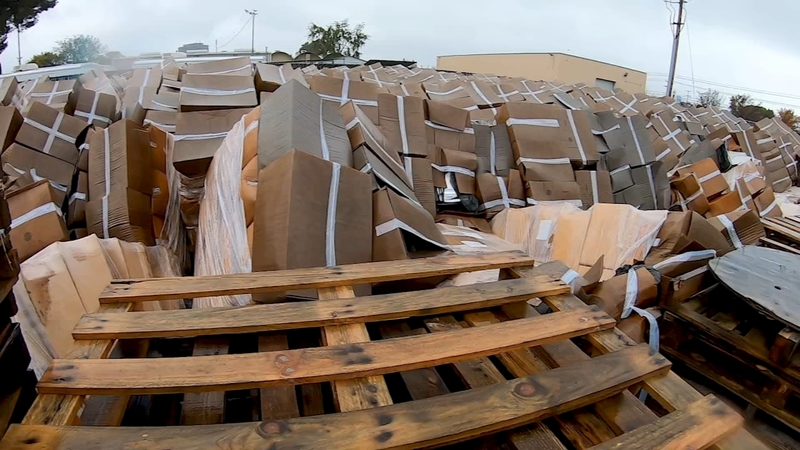 SAN MATEO COUNTY, Calif. (KGO) -- San Mateo County officials say they'll release a report this week about how millions of dollars in PPE (personal protective equipment) purchased with your tax dollars was left outside for months to soak in several rainstorms.

But the ABC7 I-Team already has a very good idea how and why this happened, after obtaining thousands of pages of county emails using the California Public Records Act.

Investigative Reporter Dan Noyes is back with another exclusive report on this controversy.

The county manager has pledged several times to be transparent about what happened, but the emails show he and other county officials were very concerned about massaging the information they would release to me and you.

PREVIOUS REPORT: Here's how much its costing to clean up PPE left in the rain in San Mateo Co.

After the I-Team found tens of thousands of boxes of personal protective equipment purchased for the pandemic soaking in the rain at the San Mateo County Event Center, County Manager Mike Callagy promised a full, accurate account of what happened.

"Government's not perfect. We do make mistakes. And I think that the important thing is that we're transparent, that we own up to it," Callagy said.

That was the finely-honed message Callagy gave the Board of Supervisors last week, after spending $15,000 a month to hire public relations consultant Alex Tourk who, by the way, urged him several times to "not respond to any request from Dan Noyes."

We found that quote among more than 3,000 pages of county emails obtained under the California Public Records Act. They also show that Callagy directed his staff to avoid giving you the whole picture of what happened with the PPE.

On Jan. 25, he emailed county spokesperson Michelle Durand, who was working on Callagy's talking points for the Board of Supervisors that day. "Please take out 'were moved outside to accommodate (sic) an event.' Give me a call so we can talk about this."

Callagy didn't want to tell the board that the PPE was moved outside in September to make room for a "Software as a Service" convention that would bring the county big bucks.

They billed it as the "Bay Area's largest in-person conference since the pandemic."

We shared what we found with Jamie Court, a nationally-recognized consumer watchdog and advocate for taxpayers.

He told us, "I think this is outrageous. This has got to be the worst PR moves in the history of PR. It's outrageous."

And emails show the county manager's office knew about the PPE being moved outside.

They received this email from an event center staffer September 27: "... all PPE has been moved out of Fiesta Hall and is currently stored in a fenced area between Gates 9 & 10," with the plan to move it back inside after the conference "to protect it from the elements."

That never happened and the rain soon came.

This email in November from the county's Risk Manager to the controller's office includes pictures of the damage, saying, "In my professional opinion, it is a total loss. I question the efficacy of PPE meant to keep people safe from COVID-19 given the damage. It is simply not worth the risk to human life."

The PPE sat there for two more months until I got that a tip and shot video of all those boxes slumping in another rainstorm. In January, I reported that sources told me the PPE cost taxpayers more than $10 million. And this email from the county's risk manager's officer confirms what I reported. But, within two weeks, the county manager had a different number for the Board of Supervisors.

VIDEO: Bay Area medical center puts more than half a million PPE and hospital gowns outside, may be ruined
EMBED More News Videos

In another PPE mishap in the Bay Area, more than half a million hospital gowns have been left outside a Bay Area hospital.

Callagy told the Board of Supervisors on Jan. 25, "We know that approximately seven million dollars' worth of protective equipment purchased by the county was left outdoors and impacted by rainfall."

Now we know that county spokesperson Michelle Durand previously suggested that change. She wrote, "Do we want to use the $10M value which includes shipping and taxes or keep it to the value of the goods being approximately $7m?" And that's what they did.

Dan Noyes: "How do you see that? Is that actually lying to the public? Or is that just kind of telling a white lie?"

Jamie Court, Consumer Watchdog: "It's actually telling a very big lie because the taxpayers paid for the cost of the shipping and the taxes. These are not added costs. These are the cost to the taxpayer. And that is a blatant lie. I think heads need to roll."

The county promised an independent investigation within two to four weeks of my first report in January. It's more than a month late now. They say it's supposed to be released any time. I'm watching for it.

In the past, they've tried to say these were non-medical supplies, but Dan Noyes did find gowns for surgery out there, and the bulk of the boxes are called "isolation gowns." They are non-sterile, but are used by healthcare professionals when seeing patients, including those with COVID-19.

That's from the official word from the CDC.