Remember all that PPE left in the rain in San Mateo Co.? Here's how much its costing to clean it up

The county left more than $7.5M of COVID protective gear outside from September until Dan Noyes broke the story in January.
KGO
By Dan Noyes 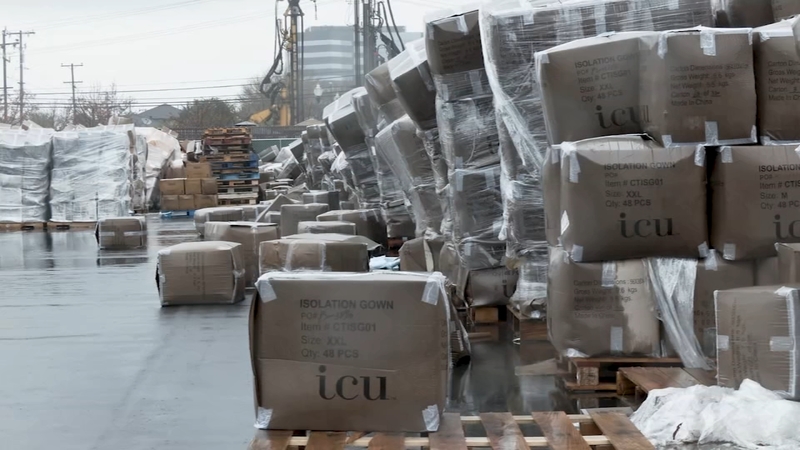 SAN MATEO COUNTY, Calif. (KGO) -- The San Mateo County Manager came under intense questioning Tuesday for all that personal protective equipment for the coronavirus pandemic left out in the rain and discovered by the ABC7 I-Team more than two months ago.

You get the sense that the county is trying to put the best spin on what was a major mistake - millions of dollars of PPE bought with your tax dollars, just left outside for months.

County Manager Mike Callagy appeared before the Board of Supervisors to give the latest on the cleanup of all that PPE the I-Team's Dan Noyes found out in the rain at the San Mateo Event Center: hospital gowns, face shields, goggles, gloves and more.

Callagy told the board, "Government's not perfect. We do make mistakes. And I think that the important thing is that we're transparent, that we own up to it, and we learn from it."

Callagy revealed Tuesday more than $128,000 worth ($128,152.82 to be exact) of PPE was ruined in the rain, but said that represented just 1.7% of what was left outside, and that plastic wrapping inside the boxes saved most of it. Do the math and that means the county left more than seven-and-a-half million dollars' worth ($7,538,401.18) of PPE outside from September until Dan Noyes broke the story in January.

RELATED: Bay Area medical center puts more than half a million PPE and hospital gowns outside, may be ruined

Callagy said the problem was, no one was in charge, "We really had no one person overseeing this, I think there was multiple hands in this. And, and that led to some of the confusion."

Callagy said cleaning up that mess has cost:

He admitted the county has been able to give away just a tenth of the surplus PPE. There's still a thousand pallets left.

Callagy said, "Cor-van is the company we've hired to, to remove this from the Event Center and move to warehouses throughout the Bay Area for safe storage."

More of your tax dollars.

Tuesday's hearing got heated. Just as Supervisor David Canepa pressed the county manager for answers, the board president cut him off.

David Canepa: "It's just so disappointing that we find ourselves-"
Don Horsley: "Supervisor Canepa, summarize your point, please."
David Canepa:m"Yes. Can you, can you hold on, I'd appreciate the courtesy. My point is, is clearly this is, that this should never, ever have happened. And it should never ever happen again."

The county ordered an independent investigation into how this happened -- that was supposed to take two to four weeks. Callagy said today, the report should be released by the end of the month.