The Russian invasion has stranded 15 members of their team in Kyiv caring for about 40 dogs.
KGO
By Tim Johns 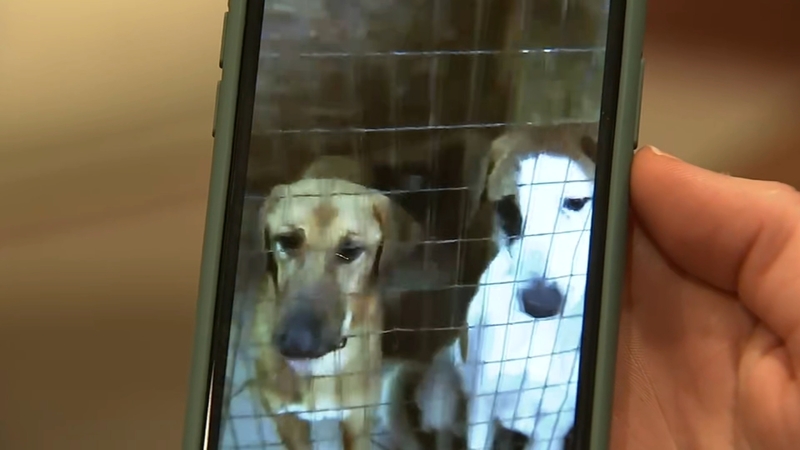 Local nonprofit trying to save volunteers, dogs stranded in Ukraine

SAN LEANDRO, Calif. (KGO) -- As the war in Ukraine continues to unfold, one Bay Area nonprofit is working to help get both their volunteers and animals out of the country to safety.

For Jena Dzitsiuk, a Ukrainian living in San Leandro, the past week has been difficult.

"It's horrible hearing how some of my friends cannot leave and they are not safe," she said.

Since the Russian invasion began, her homeland has turned into a warzone. Leaving her on a knife's edge over what might happen next.

But it's not just her loved ones that Dzitsiuk is worried about.

Several years ago, she helped form a nonprofit for disabled and unwanted dogs in Ukraine. Trying to find them new homes in America.

The Russian invasion has stranded 15 members of her team in Kyiv caring for about 40 dogs.

Dzitsiuk says while unable to get the necessary transport to get the animals to safety in neighboring countries, her volunteers have opted to stay with them in the city.

Many spending nights in makeshift bomb shelters with the animals as the war rages on.

"I am afraid that the people won't even leave without the dogs. They are so worried about them," Dzitsiuk said.

But Dzitsiuk's passion goes beyond just helping those still in Ukraine. For her, it's also personal.

Her own dog, Zoob, which means tooth in Ukrainian, was one of the dogs rescued through her nonprofit.

Now, Dzitsiuk says she's working tirelessly to get her team and the animals out of the country.

Raising money through the group's Facebook page to try and pay drivers for transport to the Ukrainian border.

A goal that Dzitsiuk says where failure is not an option.

"I don't want to think about that," she said.

There is also a GoFundMe page you can donate to here, called Stand with Ukraine, Help Ukrainian Dogs.