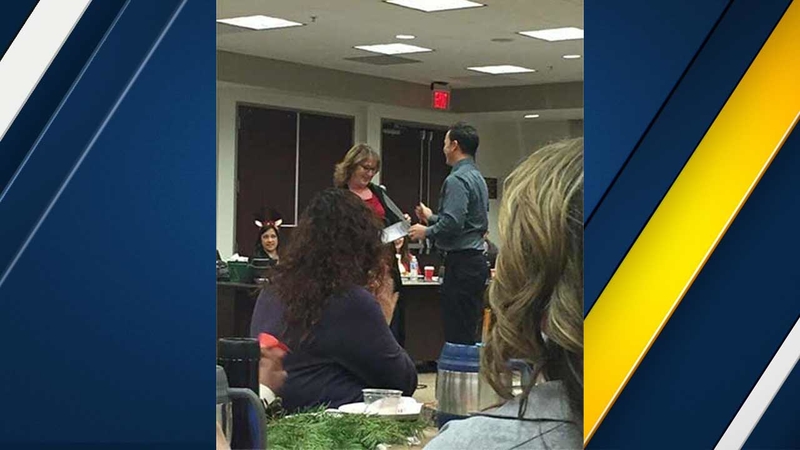 The photo shows Julie Paez, a well inspector, receiving an Employee of the Year award from a program manager. Paez suffered two gunshot wounds to the abdomen during last week's suspected ISIS-inspired attack.

On Tuesday, Park Center Circle, the street in front of the center, had partially reopened to the media and public.

Meantime, FBI investigators inside the center are re-enacting the shooting to see what additional information, if any, they might be able to piece together.

Authorities disclosed that a year before the rampage, Farook's co-workers at the county health department underwent "active shooter" training in the same conference room where he and his wife opened fire.

It was not immediately clear whether Farook attended the late-2014 session on what to do when a gunman invades the workplace, San Bernardino County spokeswoman Felisa Cardona said.

Two employees who survived the attack said colleagues reacted by trying to do as they had been trained - dropping under the tables and staying quiet so as not to attract attention.

According to David Bowdich, assistant director of the FBI's Los Angeles office, Malik and Farook had been radicalized for quite some time and had taken part in target practice at local gun ranges.

An instructor at Riverside Magnum Range - about 20 miles from the Inland Regional Center where the two targeted Farook's co-workers a few days later - said Farook visited the range on Nov. 29 and 30.

U.S. officials previously said that Farook, a U.S. citizen originally from Chicago, traveled to Saudi Arabia in July 2014 and returned less than two weeks later with Malik in tow. Malik arrived in the U.S. on a Pakistani passport and a fiancee visa.

At a news conference Monday, an official with the Bureau of Alcohol, Tobacco, Firearms and Explosives confirmed that Farook's former neighbor Enrique Marquez had purchased two assault rifles, which were used in the attack. What remains unknown is how those rifles changed hands. Marquez has not been charged with a crime.

Farook purchased two 9-mm pistols as well as a third rifle that was found at the couple's home, officials said.

Malik pledged allegiance to ISIS on Facebook during the rampage, authorities said. The Muslim couple was killed hours later in a gun battle with police.