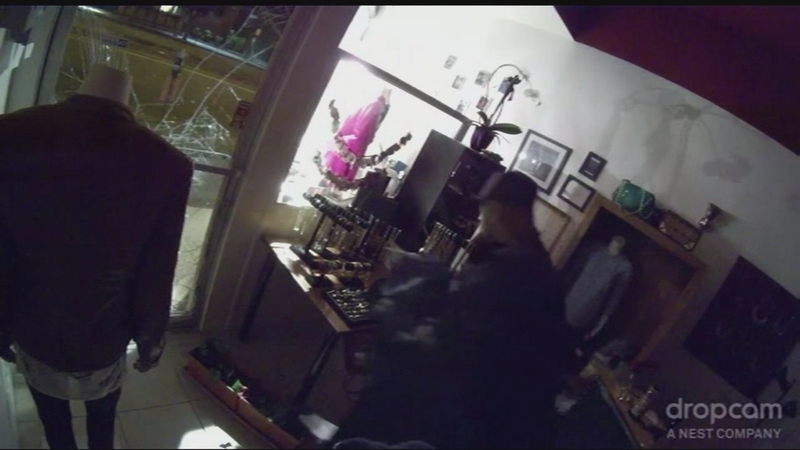 SAN FRANCISCO -- San Francisco police are asking for the public's assistance in identifying a man who was caught on video surveillance footage last month burglarizing a clothing store in the city's West Portal neighborhood.

San Francisco police spokesman Officer Carlos Manfredi said the video surveillance footage as well as still shots of the suspect are being released to the public.

According to Manfredi, on April 21 shortly before 3:30 a.m., the suspect used a rock to smash the front door of the store, The Art of Style, on West Portal Avenue.

The owner of the boutique, 25-year-old San Francisco resident Nadia Giusti said her surveillance camera captured the suspect breaking the glass door with a rock. The suspect then kicks the glass panel in and enters the store with a duffle bag.

She said the break-in sent shards of glass flying to all corners of the store.

Manfredi said roughly $3,000 in stolen clothing and other items were reported along with about $2,000 in damaged property.

Giusti said she opened her store more than two years ago and that this is the first and hopefully the last break-in she'll have to deal with.

"It is violating," she said, explaining that she is in the process of purchasing an alarm system to make sure it doesn't happen again.

Giusti said she closed her store for eight days following the burglary to clean up and that luckily her insurance covered the costs of the break-in.

Manfredi said the suspect appears to be 35 to 45 years old, standing about 6 feet tall and weighing about 200 pounds.

He said before bringing the case to the public, "Inspectors have to follow up and exhaust all their leads."

Unfortunately, Manfredi said, the suspect remains at large and could be connected to other recent burglaries in the neighborhood.

She said other criminal incidents have been reported in the neighborhood, such as a smash-and-grab robbery at a nearby store and numerous robberies from the AT&T store.

According to Manfredi, a police inspector who covers the West Portal neighborhood said there has been an uptick in robberies and burglaries committed in the area and that it's possible this person may be the culprit.

Anyone with information about the suspect is urged to contact the police department's anonymous tip line at (415) 575-4444 or text a tip to 847411 with "SFPD" followed by the message.