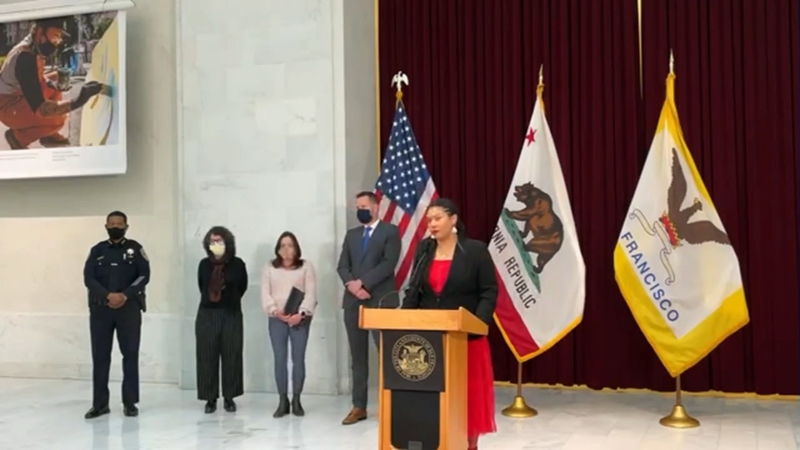 SAN FRANCISCO (KGO) -- Images of needles on the street and people using drugs have become too common in San Francisco's Tenderloin neighborhood prompting Mayor London Breed to declare a state of emergency.

The mayor says more than 700 people died due to drug overdoses last year in San Francisco.

"We are in a crisis," said Mayor Breed.

In a statement, she said, "The situation in the Tenderloin is an emergency and it calls for an emergency response."

"We showed during COVID that when we're able to use an Emergency Declaration to cut through the bureaucracy and barriers that get in the way of decisive action, we can get things done and make real, tangible progress. We will use that focus and coordination to disrupt the illegal activity in the neighborhood, to get people the treatment and support they need, and to make the Tenderloin a safer, more livable place for the families and children who call the neighborhood home," she added.
"They need help and this is a statement of the urgency that help is on the way," said Supervisor Matt Haney.

I'm declaring a State of Emergency in the Tenderloin, which will eliminate bureaucratic barriers and allow us to more quickly respond to the conditions relating to the health and safety of the people in the neighborhood. https://t.co/teQZzMyg0F

Mary Ellen Carroll, Executive director of the Department of Emergency Management, will spearhead the effort.

"An emergency declaration allows us to cut through the red tape to obtain the contracts, the resources and the personnel that we need to the address the crisis conditions in the Tenderloin," said Carroll.

It's welcomed by community members.

"Residents need action and they're going to be excited to see that someone's finally paying attention to the neighborhood to the residents," said Christy Shirilla, Director of Community Organizing and Resident Voice at the Tenderloin Community Benefit District.

This will allow us to waive rules around contract procurement and waive zoning and planning codes to quickly open a temporary linkage site, where people with substance use issues can receive behavioral health services and get off the street.

"She listened to their stories about getting harassed or assaulted on the street or hiding from gunfire in the middle of the day at a park," said Shirilla.

The group also spoke with the Mayor's policy advisors about changes they'd like to see to the neighborhood.

"I hope that the help that's offered is long lasting," Shirilla continued.

We showed with the COVID Emergency Declaration that when we can cut through the barriers that get in the way of decisive action and we can make real, tangible progress.
We're going to take that same approach and coordination to make the Tenderloin a safer, healthier neighborhood.

Mayor Breed says it is.

"The goal is to not let anyone stay out on the streets," said Mayor Breed.

An intervention people who live and work in the Tenderloin say has been needed for some time.

The Declaration of Emergency must be ratified by the Board of Supervisors within the next seven days, and will exist for no longer than 90 days, the mayor's office said.