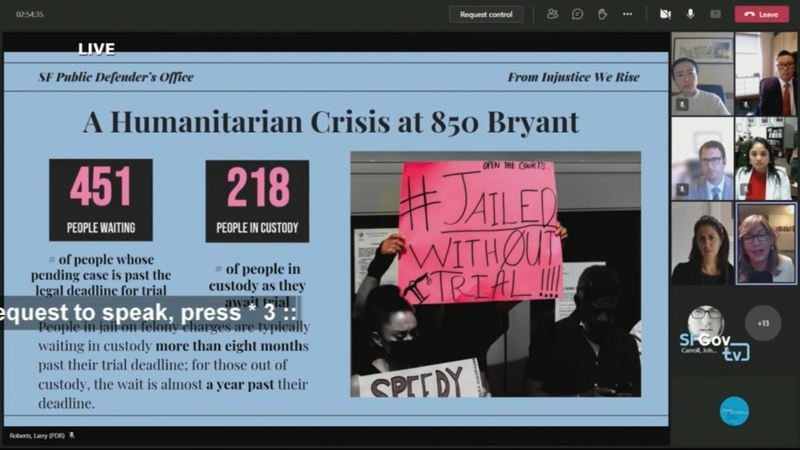 There are 451 felony cases and 218 untried defendants remaining in custody past their statutory deadline.

"Every single person has the right to a speedy trial," said Ronen.

Noticeably absent though were representatives from San Francisco Superior Court.

"If the courts aren't open already why is that," she continued.

A spokesperson for San Francisco Superior Court told ABC7 News because the case backlog dispute is part of a pending lawsuit he couldn't discuss it.

Supervisor Ronen said the courts have repeatedly cited the COVID19 pandemic as an excuse, despite the many public services that have reopened.

"Yet people who want to exercise their right to a speedy trial are told to wait," said Ronen.

The public defender's office called it a humanitarian crisis and emphasized the racial disparities in those waiting.

"The failure to afford the most vulnerable and oppressed members of our community a speedy trial should give us all pause," said Kathleen Guneratne.

Solutions explored included using civil departments for criminal cases and considering alternative San Francisco locations for trials, something the sheriff's office addressed in terms of security changes that could be necessary.

The committee voted to send a resolution prioritizing criminal trials and safely opening courtrooms to the full board with a positive recommendation.