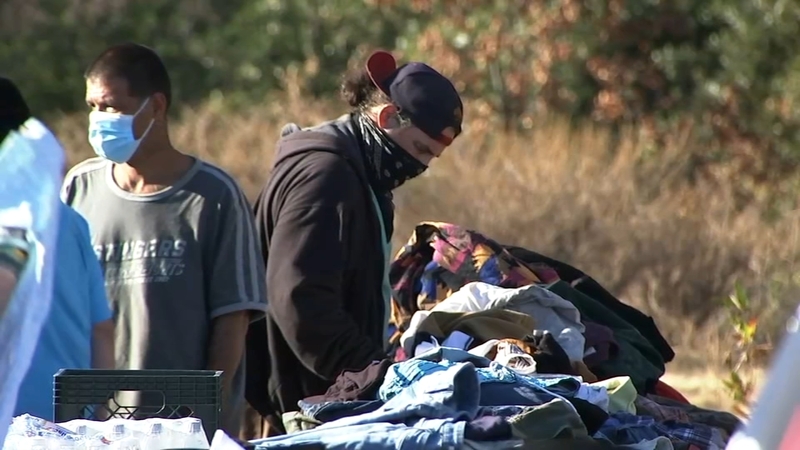 The South Side Unhoused Resource Fair (SURF) was a first for the Unhoused Response Group (URG), all-volunteer team serving unhoused neighbors across Santa Clara County. They partnered with a long list of other advocates and agencies including HomeFirst, Bill Wilson Center, Gardner Health and Dignity on Wheels.

"We are definitely in a spot that within a quarter-mile of us, there's 100 unhoused people," Shaunn Cartwright with URG told ABC7 News.

It's a spot Cartwright described as a "resource desert," a distance away from homeless services which they say are located mainly near downtown.

However, along the Guadalupe River in south San Jose, the resource fair offered basics and beyond.

"We have a lot of clothes, we're going to have food," Cartwright continued. "We have NARCAN. We have the meth test strips to make sure there's not fentanyl in it."

Unhoused resident Michael Mosier said he's lived on and off the streets for 25 years. He admitted errands which would've taken days or required hours of travel, were tackled here.

"It probably would take a few days to find out where they're at," Moiser told ABC7 News. "And then getting there. 'Cause I do ride a lot. I'm always riding somewhere."

Fortunately, a short ride for Moiser since the services were brought to his neighborhood.

Cartwright said there's a deeper connection driving her crew as each has experienced homelessness at some point of their life.

"I'm kind of overjoyed and overwhelmed right now," RJ Ramsey told ABC7 News. "I was unhoused out here for approximately three and a half years."

Ramsey is now an advocate and volunteer with URG who returned to his former campsite on Thursday.

Describing difficulties he said, "When you're out here on the South Side, you don't know about things like EBT, food stamps, any programs that can assist you."

"You might as well be speaking another language out here," he added.

After having to seek out services himself, Ramsey said he's certain this fair will be the first of many.

"We never had any services," Ramsey said. "Whereas, if you're downtown and in some other areas- you have St. James Park, people drop-off food there. There's clothes drives, there's Salvation Army. Out here, it's just fend for yourself."

Cartwright added, "It's just so hard and disparaging when you're unhoused, to have to go to multiple places by bus. And it takes so much time. You know, it could take you five hours in one day to go to one place- one appointment. Especially during COVID when a lot of places just aren't as open."

She explained the resource fair quickly gained support from several City of San Jose leaders, including support from representatives of District 2, District 9 and District 10.