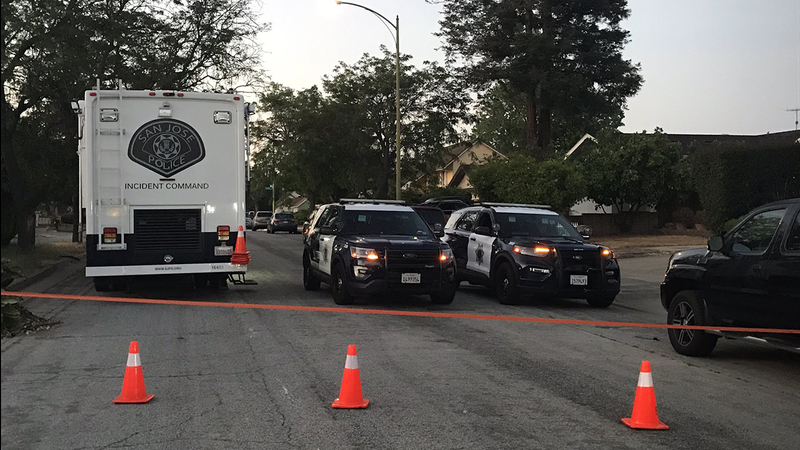 SAN JOSE, Calif. (KGO) -- A suspect has died after a police shooting in the South Bay, according to the San Jose Police Department.

Police say two officers were following up on an investigation Monday night when a suspect confronted them near Tofts Drive and Pembroke Drive around 9:40 p.m.

"During that follow-up investigation, the suspect they were investigating presented himself. There was a confrontation. There were some shots fired by one of our officers, subsequently, the suspect was struck and he was pronounced deceased at the scene," said San Jose police Sgt. Christian Camarillo.

SJPD says that the suspect was pointing a handgun at an officer.
The shooting happened near the suspect's home on the street, according to Sgt. Camarillo.

The two officers are being placed on 2 week administrative leave.

"They went through a very traumatic experience," said Sgt. Camarillo. "None of us come to work thinking 'hey, we are going get into a shooting today'. It happened and now we have to deal with the aftermath."

San Jose police provided an update after a man was killed following a police shooting.

This is the second deadly police shooting in San Jose this year.

"An officer-involved shooting is going to be heavily scrutinized," said Camarillo during Tuesday's press conference. "We are completely prepared for that. "

"Our focus is on taking care of the suspect's family, making sure they have all the information and everything that they need, as well as taking care of our officers. I'm just going to put it that frank. It was a very deadly situation that occurred here last night, which caused them to react in the way that they did," Camarillo added.

San Jose police say this a complicated investigation on Pembroke Dr. They say police shot and killed a man who confronted them last night while they were doing a follow up investigation. pic.twitter.com/NYhTKtPeNo

We are on the scene of a deadly shooting on Penbroke Dr. in San Jose. Police say officers were confronted by someone while they were investigating in the neighborhood. That person was shot and killed. Police have not released anymore information. pic.twitter.com/fjfzMjtvZ8

Officers were conducting a follow up investigation on the 1100 Block of Tofts Drive. During the investigation, they were confronted by the suspect.

More details when they become available.