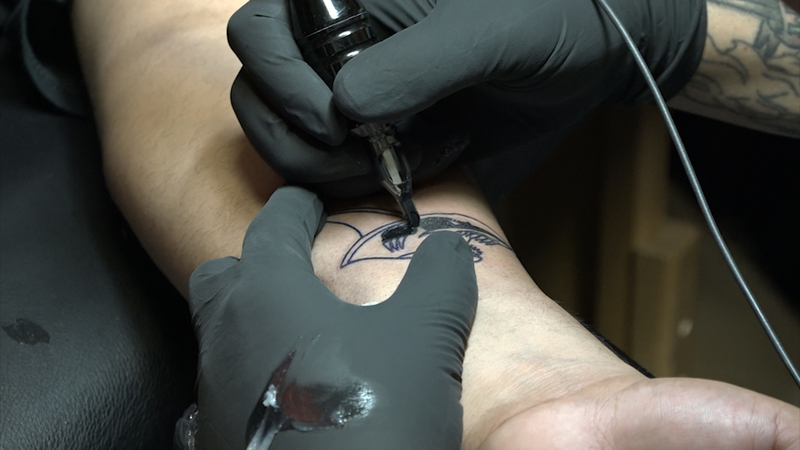 Sharks fans get free tattoos for being 'Sharks for Life'

Nearly 200 of the latter category lined up, many overnight, in order to score the opportunity to get the team's logo permanently tattooed on their body.

The catch? The first 40 people got the tattoo for free, courtesy of the Sharks themselves.

Flat out dedication! Jeremy Cruz lined up outside of Players Ink last night at 8:30 p.m. to be the first customer to get his @SanJoseSharks tattoo! It's his first ink and he says it was well worth it. pic.twitter.com/eQW34kyzfn

"I saw that this was really popular on social media so I got here last night at 8:30 p.m.," Jeremy Cruz said. "I basically camped out and only got 30 minutes of sleep. It's my very first tattoo ever and it's just exciting. It's Sharks for Life and something that I'll never forget."

Cruz and others lined the block the night before to be sure they were among the first 40 fans.

The Sharks are deep in the chase for a Stanley Cup and they attribute that in part to their dedicated fan base.

"We had a lot of people that drove six hours from all around the Bay Area and even from Los Angeles to come out," Sharks Marketing Manager Amanda Behrendt said. "It just shows what a wide footprint that we have."

The team saw the Western Conference Final as the perfect time to reward their fans for the dedication they show to the Sharks game in and game out.

Fans had six designs to choose from for a tattoo on their arm or leg.

The fans that ABC 7 News talked with said they dedicate themselves to the team on game day, with the color of their homes and permanently on their bodies as well.

"The last game that we had against the Knights, I told my friend that if we beat them, I promise that I will go get the Sharks tatted on me," Christian Ocana said. "I've been down since day one. I'm born and raised out here in San Jose. I can't go wrong. I have to represent my team and my hometown."

SHARKS FOR LIFE! Fans have been here at Players Ink in San Jose since LAST NIGHT to get their free @SanJoseSharks tattoo! The products look great! pic.twitter.com/KKrBzdieT3

The team will be doing the "Sharks for Life" tattoo campaign on Friday May May 17 at the Black Lagoon in San Jose, as well as Tuesday May 21 at State of Grace in San Jose as well.