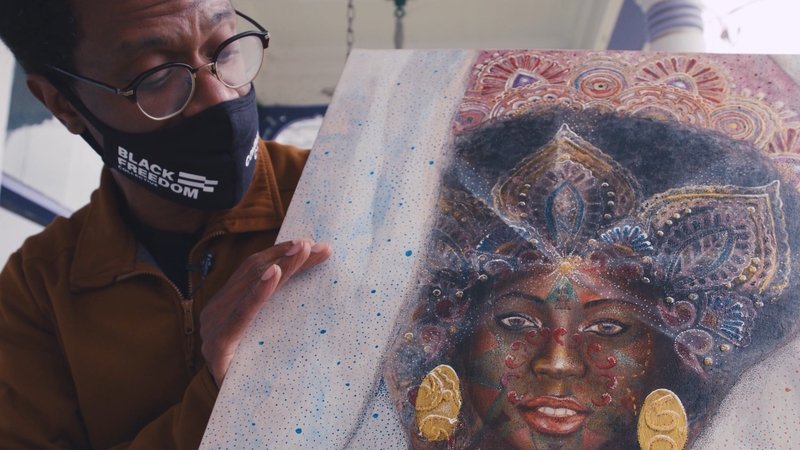 "One day I'm in my cell the whole day, and the other day I get out for 90 minutes. So, a lot of my time is waiting for that 90 minutes," he says as he chuckles.

Thomas has used his time in prison to accomplish a lot. He completed his Associate's Degree and is aiming for his Bachelor's, he freelance writer for The Marshall Project and San Quentin News, and he's an advocate for voting rights for incarcerated people as well as criminal justice reform.

After attending a lecture by Bryan Stevenson, a well-known civil rights attorney, Thomas was inspired by the idea of "proximity."

So Thomas and a fellow incarcerated person, Juan Meza, along with a formerly incarcerated man, Emile DeWeaver, co-founded "Prison Renaissance."

"He came up with the idea. He just wanted a way to use proximity and art to make a difference," Thomas said of DeWeaver.

Prison Renaissance aims to use art and community to end cycles of incarceration. They want to create more proximity between the general public and incarcerated people. The program provides a platform for incarcerated artists and writers to build personal and professional connections with people outside of prison and in their field.

Through Prison Renaissance, Thomas was given the opportunity to curate an art exhibit made of works by 12 incarcerated or formerly incarcerated people. The exhibit, titled "Meet Us Quickly: Painting for Justice from Prison," is being digitally hosted by the Museum of the African Diaspora.

"First of all, let me be honest, I don't know how to curate anything. I stumbled into this position," Thomas said. "I just use my untrained eye, like just really decide what's beautiful." He goes on to say, "because I think art is beautiful. Even when it's describing something ugly, it's still beautiful."

The themes of the art pieces are varied. But each piece comes with a written statement by the artist, sharing their message and perspective in their own words.

"We are taking incarcerate peoples' art," says Emile DeWeaver, founder of Prison Renaissance and formerly incarcerated at San Quentin. "We're making sure they still own it, and we are paying them for it."

The paintings are being auctioned to the public. According to DeWeaver, one painting sold for $1,100. Prison Renaissance gives 85% of the proceeds back to the incarcerated artist.

"We hope that they can earn an income while in prison, so that when they come home, they already have a résumé. They have community connections with people who work in their field," Rahsaan said.

The exhibit is also meant to challenge the way we view people who are incarcerated.

"Meet Us Quickly: Painting for Justice from Prison" is being digitally hosted by the Museum of the African Diaspora through March 31st, 2021.