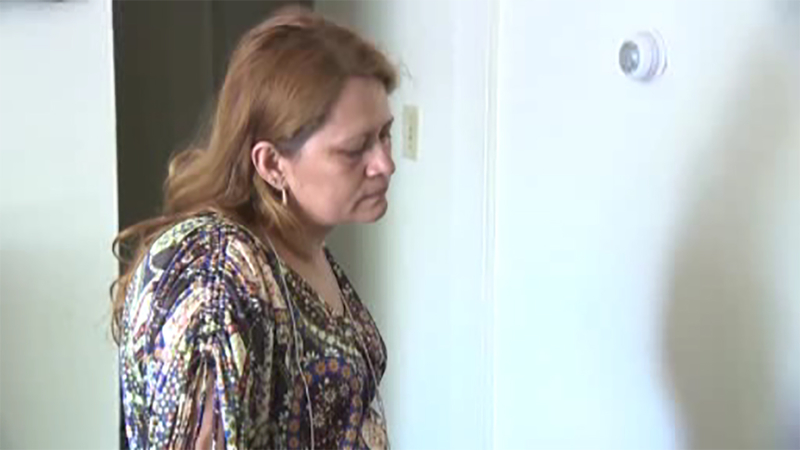 NORWALK, Connecticut -- A mother of four who has lived in the U.S. for 24 years is refusing to abide by a deportation order to her native Guatemala and has taken sanctuary in a Connecticut church.

Nury Chavarria, of Norwalk, was supposed to board a plane on Thursday. But instead, she went to the Iglesia De Dios Pentecostal church in New Haven.

In a news conference outside the church, her youngest child, 9-year-old Hayley, said her mother is not a criminal and that she loves her.

"I want her to stay because I love her so much," Hayley Chavarria said. "And my message to President Trump is, don't separate my family."

Chavarria's children are all American citizens. Her oldest child, who is 21, has cerebral palsy.

She is being deported not for a violent crime, but for coming to this country without legal papers.

She was told to leave, but her four children are staying.

"Everything will be fine, but everything is not fine," Hayley Chavarria said. "I'm scared about what is going to happen to my brothers and sister, all of my pets. I'm scared."

Senators Richard Blumenthal and Chris Murphy asked federal immigration authorities for a stay of deportation on humanitarian grounds, but it was denied.

Connecticut Gov. Dannel Malloy attended the rally for Chavarria Thursday, along with Hayley, as both pleaded her case.
"She would like to remain with her family, and she has great concern about what would happen to her children," Malloy said.

Nury is the latest example of a change in policy by the Trump Administration.

U.S. immigration officials said Friday they consider Chavarria to be a fugitive, but they acknowledge they have a policy that restricts them from entering a house of worship except in extraordinary circumstances.

"As a current exercise of discretion and after an exhaustive review of her case, the agency has allowed her to remain free from custody while finalizing her timely departure plans," ICE said in a statement.

"We're not able to do much except that we lend our voice, we raise this issue," Malloy said. "And we raise it in the context which I hope a broader audience of Americans will understand. Every time we accept being lied to or misled by our government, we are endangering our personal freedoms. And that's part of what's at stake here."