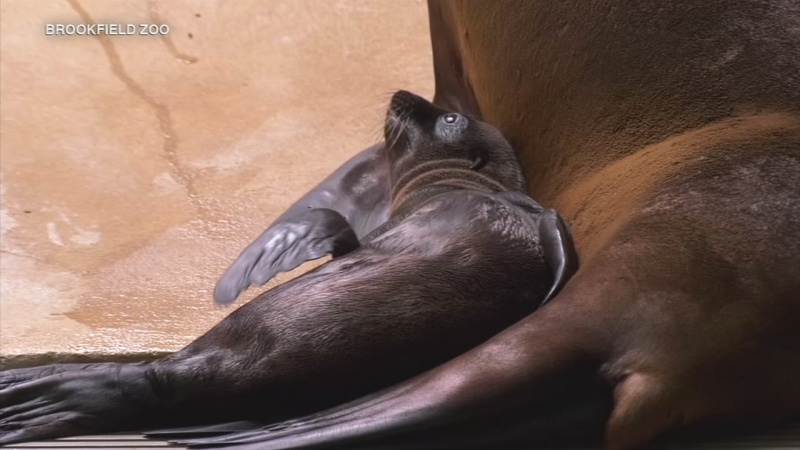 BROOKFIELD, Ill. -- Two California sea lion pups were born at the Brookfield Zoo in June. Their births were the first for this species at Brookfield in nearly 30 years, Chicago Zoological Society officials said.

The young sea lions, a girl and a boy, are currently staying behind the scenes, bonding with their mothers and learning how to swim. They are expected to have access to their outdoor habitat at Pinniped Point in a few weeks, the zoo said.

California sea lion pups born in June and July usually weigh 13-20 pounds and do not swim for the first few weeks of their life, the zoo said. The stay in tidal pools until they learn to swim with their mothers. The nurse for at least five months, but can sometimes continue for more than a year. Mothers recognize their young through smell, sight and vocalizations.

Brookfield's newest California sea lions are important to the genetic diversity of the species' North American zoo population because of their parents' unique backgrounds.

Josephine was abandoned by her mother at Pier 39 in San Francisco, which officials said was an unusual place for the animal to have given birth. She was helpless and would have starved to death if she hadn't been rescued. Josephine was brought to Brookfield in 2010 for care and has lived at the zoo ever since.

Arie was found stranded on a beach in 2009, when she was about 1 year old. She was rescued and rehabilitated about three times by a California standing facility before officials determined she couldn't be released back into the wild. She was taken to the Aquarium of Niagara in Niagara Falls, New York. Based on a recommendation by the Association of Zoos and Aquariums' California Sea Lion Species Survival Plan, she was brought to Brookfield in 2016, officials said.

Tanner moved to the Shedd Aquarium based on a breeding recommendation. In 2012, he was removed permanently from the wild by NOAA Fisheries because he was feeding on a federally protected species of salmon in the Bonneville Dam area along the Columbia River, the zoo said.

Although the International Union for Conservation of Nature gave California sea lions the label of "least concern" on its list, the species still faces challenges in its natural habitat, which stretches from Vancouver Island in British Columbia down to Baja California in Mexico.

Officials said those challenges include getting tangled in fishing gear, ingesting toxins from prey, dumping of toxic and hazardous waste and changes in global atmosphere pressure that affects the availability of their prey.