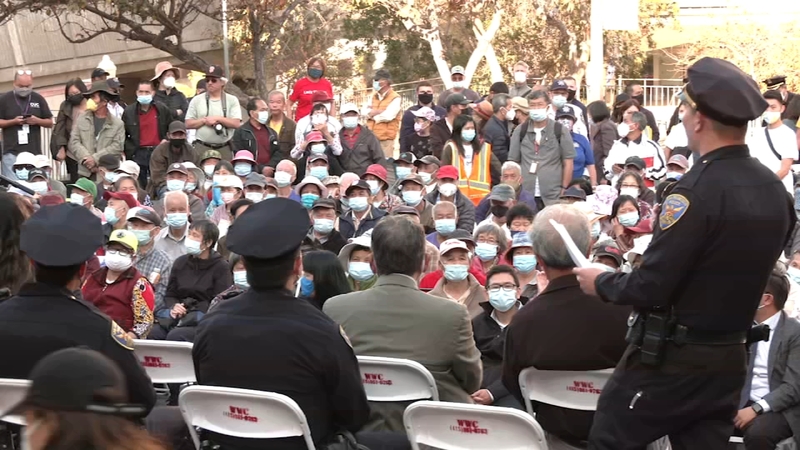 Chinatown crime down in areas of increased deployment, SFPD says

SAN FRANCISCO (KGO) -- During the course of the pandemic, San Francisco's Chinatown was hit especially hard. First the loss of business then anti-Asian attacks. Wednesday night though, hundreds showed up for Chinatown Night Out where the police chief and mayor spoke.

Hundreds packed into San Francisco's Portsmouth Square for the event, one with a goal of better connecting the community with the police department.

"Their visibility and their presence is very welcome and it definitely makes an impact on that community," says Chinatown merchant Tane Chan.

The Night Out comes as the city has seen a rash of attacks against Asian Americans, but Mayor London Breed says several suspects in those cases have been caught.

"I will say that we have more resources, more cameras, and more eyes and ears on the street than we did before, and almost every single incident that occurred, those folks have been arrested, they're awaiting trial so they're behind bars. We're hopeful that they will be held accountable so I think that hopefully, the word is out that if you commit these acts you will be held accountable," says Mayor Breed.

San Francisco's Chinatown is part of the police department's Central District. The latest crime numbers from the end of July show homicides, rapes, and robberies are down here but aggravated assaults are up. Police Chief Bill Scott says extra officers are now patrolling Chinatown and they are seeing improvements.

"A lot of that increased deployment is overtime staffing but the good thing is, where the officers have been deployed, we have seen crime decrease in those areas and that is what this is all about," says Chief Scott.

Police here gave out advice, prizes, and even food at Chinatown Night Out. Those attending say this type of event is very important right now.

"There is a lot of fear in the community, a lot of worries, a lot of seniors who are afraid to get out of their house so that's why it's even more important that we have this type of event," says Sarah Wan of Community Youth Center.

"Coming together in an organized event like this only gives us hope and joy and we get to see a lot of people that we haven't seen in about two years," says San Francisco resident Vanita Louie.