San Francisco gas station price near $6 a gallon, one of most expensive in US 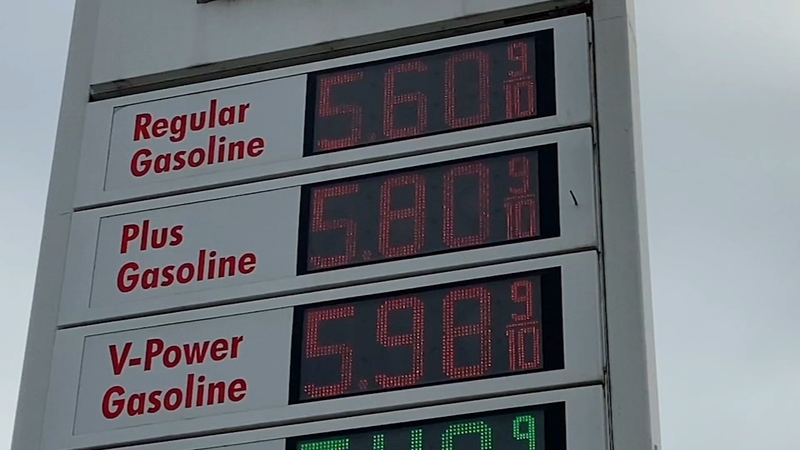 SF gas station near $6 a gallon, one of most expensive in US

SAN FRANCISCO (KGO) -- Most Americans are expected to travel by car 4th of July weekend, just as gas prices hit a seven year high. And some of the most expensive gas in the country is in San Francisco right now.

"No! That is not okay," exclaimed San Francisco resident, Whitney Conner, who stopped pumping when she realized the gas she was putting in her car was almost $6 per gallon. "The gas prices are not okay!"

Sarah Kraemer had the same reaction when she stopped to fill up at the Shell station at 4th and Bryant Streets, South of Market in San Francisco, which on Friday was charging $5.60 for a gallon of regular, $5.80 for a gallon of plus, and $5.98 for a gallon V-Power Gasoline. "I'm glad you pointed it out because I usually don't pay attention. I usually figure it's maybe 10 cents difference here and there, but not a dollar or more."

The surging pump prices already have some questioning their plans.

"Everything is going up now, food, clothes everything," said Fairfield resident, Edric Dennis, who says he has no choice but to pay high gas prices since he commutes long distances to work. "I have to go to work and take care of my family."

"Do I want to go on long road trips, how much do I want to be commuting, should I be working from home more often," asked San Francisco resident, Orli Feuchtwang.

RELATED: Gas prices are at a 7-year high, just in time for Memorial Day travel

"Prices are likely to go higher because supply is not keeping up with demand," said gas price and energy expert, Dan McTeague.

Kate Larsen: "Why would two Shell stations a few miles apart in the same city have very different gas prices?

Dan McTeague: "Well they pretty much pay the same wholesale price for gasoline, so it really comes down to the retail margin. Some feel in certain markets they can get away with charging more."

McTeague says competition is factor. The less expensive Shell station is across the street from a Chevron. Both have prices in the mid $4 range, which is about the average price per gallon in the Bay Area right now.

McTeague says the U.S. is producing about 10% less oil than it was pre-pandemic, so supply is not keeping up with current demand, which he says is creating an energy crunch.

As for California, which has the most expensive gas in the U.S., McTeague says "you have boutique gasoline here in California, the spec for gasoline is extremely difficult to make and very expensive to make, so that runs refiners $2.60-$2.65 a gallon."

"You then have about 80 to 82 cents on every gallon which is taxes, and over and above that, you have a secondary tax, a carbon tax of about 50 cents a gallon. That's to the carbon credit market, which is very expensive and always going up, then you have retailers taking anywhere from 60-70 cents a gallon. Of course consumers are the ones paying for this," he said.

McTeague expects gas prices will continue to increase this summer.