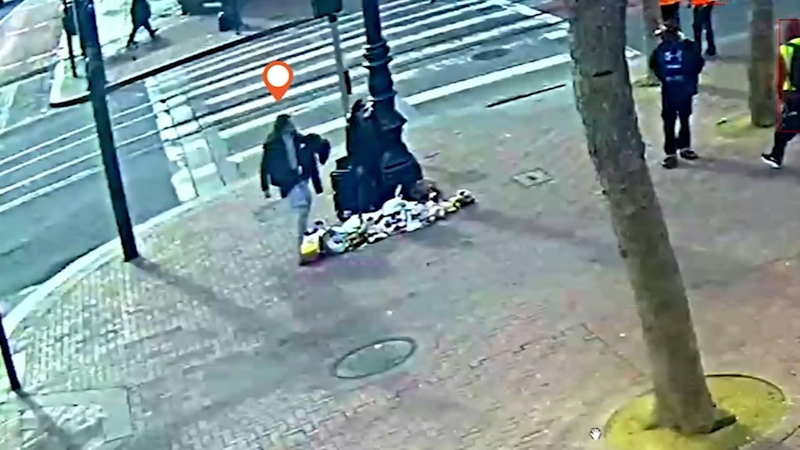 SAN FRANCISCO (KGO) -- A San Francisco public defender released new video of an attack on an Asian woman in March that he claims proves it was not a racially motivated attack.

Deputy Public Defender Eric McBurney released the seven-minute video on Thursday which follows his client, Steven Jenkins, a 39-year-old transient who has been charged with assaulting 75-year-old Xiao Zhen Xie.

The case received nationwide attention as an example of violence affecting the Asian and Pacific Island communities.

A GoFundMe page created by her grandson said she was "racially attacked" and suffered from two black eyes, "one that is bleeding unstoppably." It has since raised over 1 million dollars, which the page says will be donated "back to the Asian American community to combat racism."

But McBurney, an Asian man who immigrated from Taiwan, claims the video disputes that narrative.

While it does show Jenkins striking Ms. Xiao, McBurney points out the video also shows the context that led up to that moment.

"We want to show the difference between the complexity of truth and the simplicity of initial assumptions," said McBurney.

The video begins several minutes before the attack when Jenkins is seen grabbing a bag from a homeless encampment in the UN Plaza.

He is then confronted by several people who end up attacking him, striking him multiple times.

Jenkins begins walking away but is followed by one of the assailants who continued to hit him as he walked toward Market ant 7th street where Xiao was standing near a street lamp.

After finally getting some distance, the video shows Jenkins throwing a punch into the air before stumbling forward and striking Xiao.

What is not seen in the video is the attack on Ngoc Pham, an 83-year-old man who Jenkins has also been charged with assaulting the same morning.

McBurney said he is still investigating the circumstance of what happened with Mr. Pham.

The District Attorney's office has not charged Jenkins with any hate crimes. Rather, he is facing three counts of assault and battery on Ms. Xiao and the same three counts for Mr. Pham.

"Whether there are legal defenses or not, that I cannot get into at this point," said McBurney.

Jenkins has pleaded not guilty to all counts.

A spokesperson for the San Francisco District Attorney's Office told ABC7 News, "Our office filed the charges we believe the evidence supports. We look forward to presenting the evidence in court for a judge's ruling."