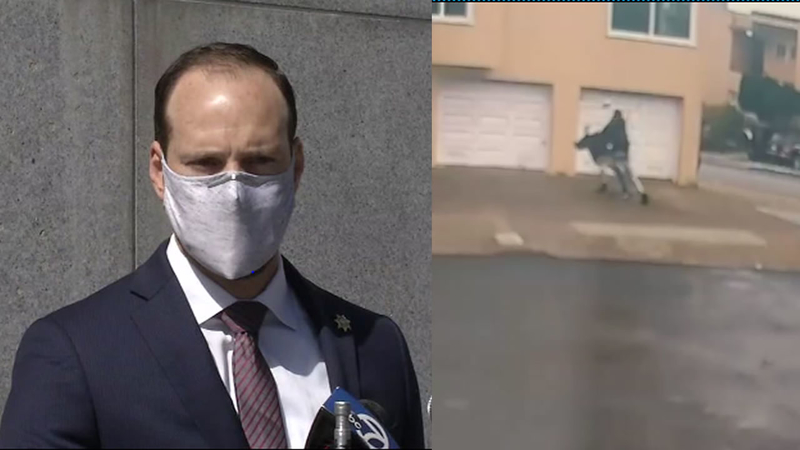 After a number of local leaders such as Assemblymember Phil Ting and new San Francisco District 1 Supervisor Connie Chan spoke out denouncing the hate and discrimination toward Asian Americans Boudin took questions from the audience.

Lim has sent at least four emails to Boudin and his communications and policy advisor Rachel Marshall since Boudin appeared on ABC7's 11 p.m. newscast in January to discuss the double fatal hit-and-run involving a parolee. The man hit and killed Hana Abe and Elizabeth Platt on New Year's Eve. The emails asked for comment on various stories pertaining to parolees and crimes toward Asian Americans.

“Chesa, with all due respect it does feel like your deflecting...”

My full interview with Chesa Boudin about the double fatal hit-and-run where the suspected driver was out on parole. https://t.co/rL7l1qYN7l pic.twitter.com/UhEEfUlo0G

"You and Rachel have not responded to any of my emails since our live interview at 11 o'clock on the double fatal hit-and-run New Year's Eve involving Hana Abe and Elizabeth Platt involving a parolee," said Lim.

Lim pressed on referencing a tweet Boudin made on Feb. 16 denouncing racism toward Asian Americans but Boudin became impatient and frustrated.

"Excuse me, Ms. Lim is there a question? I know there are other people with questions," said Boudin.

Lim pressed on, knowing victims such as the family of Vicha Ratanapakdee, the 84-year old Thai man who was pushed to the ground in Anza Vista and Chinatown-based safety group who showed up at the Hall of Justice to hear Boudin speak wanted specific answers.

"Denouncing is one thing," started Lim. As Boudin did not make eye contact she gestured and said "over here!" and Lim continued, "...but what have you implemented, boots on the ground, yourself?"

Boudin echoed the same message as community leaders citing more Chinese-speaking members of his office and working with community groups.

"We get their input and listen to their ideas and define new and important ways to collaborate," said Boudin.

He also addressed other media about not prosecuting repeat offenders such as Teaunte Bailey who was recently arrested in the robbery and killing of a 75-year old Chinese man in Oakland. Bailey had an extensive arrest record in San Francisco, including felony robbery, firearm possession and child endangerment.

"It was from an evidentiary standpoint, a weak case," said Boudin.

Lim said to Boudin earlier in the conference, "It certainly sounds like you're blaming the police if I'm reading this correctly." Boudin echoed a lack of evidence in cases in a March 4 YouTube town hall.

Boudin also mentioned at Thursday's conference he had personally met with victim's families such as the Rapanapakdees.

"I know my entire office is behind me to do whatever we can to support those victims during improbably challenging, devastating circumstances," said Boudin.

However, Vicha Ratanapakdee's son-in-law Eric Lawson told Lim Thursday afternoon he only heard from Boudin once via Zoom two days after this horrific crime.

Lawson continued to say Boudin planned to attend a recent vigil held for his father in-law but when the Ratanapakdee's conveyed they did not want to take photos or videos with him during the event, Boudin did not show up.

Before another question could be asked, Marshall ended the conference.

After being continually pressed about his response to crimes in the city and against Asian Americans, Boudin's team abruptly ended the press conference.