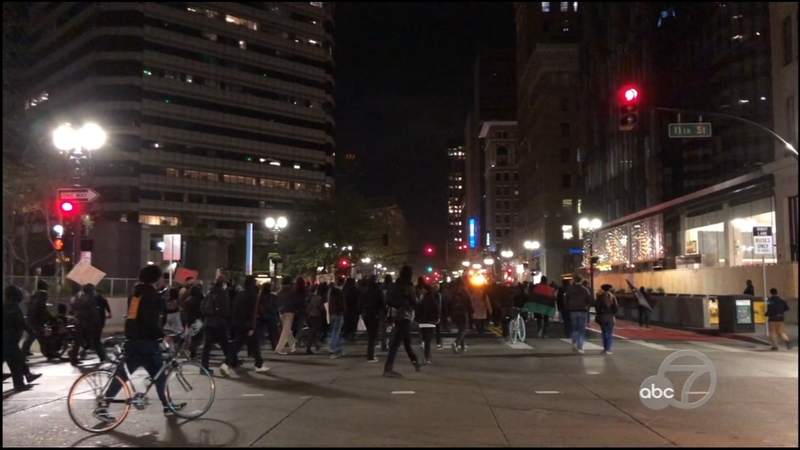 OAKLAND, Calif. (KGO) -- Hundreds of protesters took to the streets of Oakland calling for justice after a Minnesota officer shot and killed 20-year-old Daunte Wright during a traffic stop earlier this week.

The majority of the protesters were peaceful, however, some did smash the windows of several businesses including Target and Oaklandish. Another group set a car on fire at the Honda dealership as well as small fires outside multiple buildings.

Some protesters in Oakland were caught on camera using rocks and other objects to smash the windows of a Target store on Friday night.

A flyer has been circulating on social media for the past few days that says "abolish the police" and asks for justice for Daunte Wright, Donovan Lynch, who was shot and killed in Virginia last month, and Tyrell Wilson, a Danville man who was also shot and killed by police last month.

Civil rights attorney, John Burris, who is representing Tyrell Wilson's family. I spoke to him about the idea of "abolishing police."

"To me that's what abolishment means, abolishing certain types of policing activities and put in its place more humane policing that helps preserve the community as opposed to tearing it down and or killing people, when you should, in fact, be protecting them," said Burris.

RELATED: How does an officer use a gun instead of a Taser?

ABC7 News also spoke to Oakland Council member, Noel Gallo, about how Oakland stores boarded up windows ahead of the demonstration.

"I understand the people's frustrations...the only thing that I would ask is to respect the properties," said Gallo.

"It's not just the shootings that take place, those we all know. It's the day and day out policing where people are subject to racial profiling where police officers are stopping them, looking at them. I represent hundreds of people along those lines and yeah they're angry, and they should be," said Burris.
Report a correction or typo
Related topics:
societyoaklandprotestpolice shootingoscar grantrace in americarace and culture
Copyright © 2021 KGO-TV. All Rights Reserved.
TOP STORIES
SF mayor facing nearly $23K fine for series of ethics violations
LIVE: PG&E holds briefing on Public Safety Power Shutoffs
East Bay parents speak out against face masks at school board meeting
7 On Your Side investigates calamity at California EDD
'Magic Key': Disneyland unveils new program to replace annual passes
US hits 70% vaccination rate -- a month late, amid a surge
SFGH to give supplemental mRNA vaccine to those who got J&J shot
Show More
More than 110M COVID vaccines sent to 60 countries, US says
Solano Co. health director defends not mandating masks
EXCLUSIVE: SJ businesses targeted by anti-maskers amid surge
Bay Area health officers issue new indoor mask mandate
Golden State Warriors' Stephen Curry gets 4-year, $215M NBA extension
More TOP STORIES News