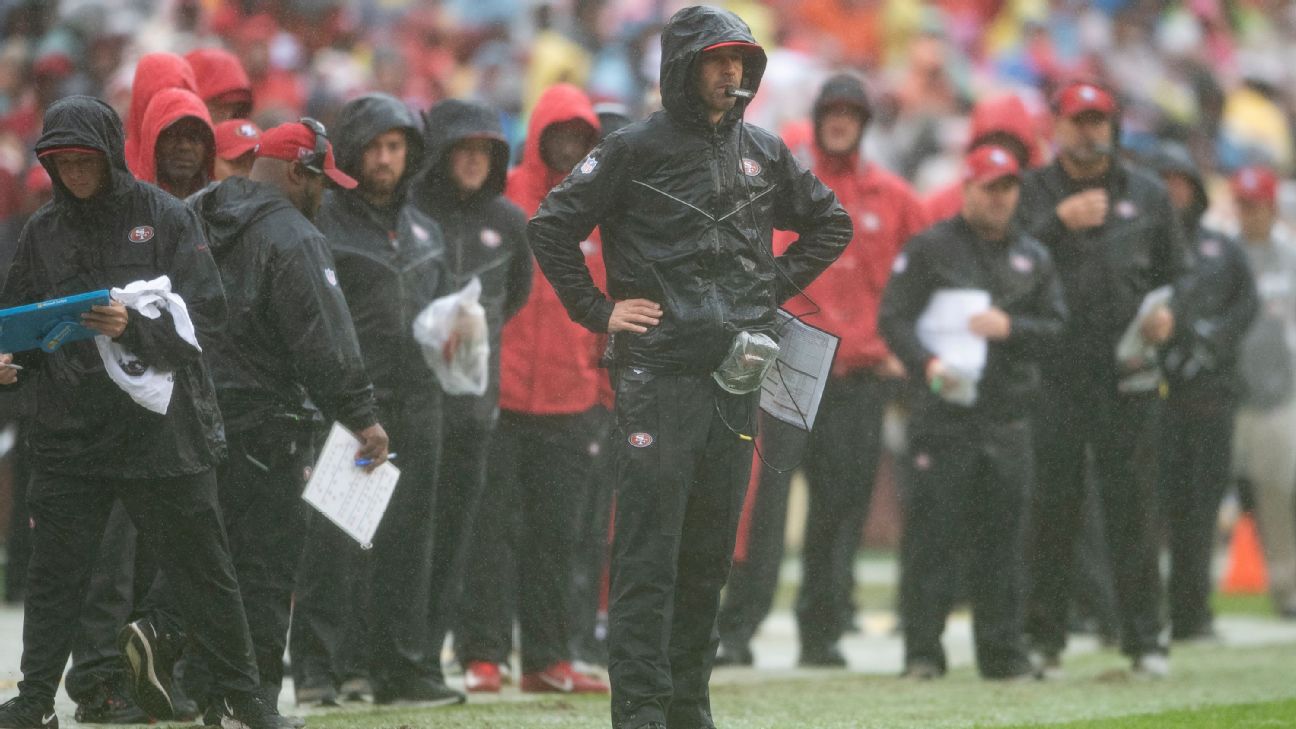 LANDOVER, Md. - By his own admission, San Francisco 49ers coach Kyle Shanahan is "a little more sensitive" when it comes to the turmoil that occurred when he and his father, Mike Shanahan, coached together with the Washington Redskins.

Which is why after Sunday's 9-0 win improved the Niners to 6-0 on the season, Kyle Shanahan awarded a game ball to his father. Although Shanahan played it coy when asked who had received the game ball, tight end George Kittle spilled the beans in his visit to the podium moments later.

Kittle called the moment for father and son "pretty special."

"It's definitely a game that we wanted to win for both him and Mike Shanahan," Kittle said. "And it was really fun that we were able to get that done."

Throughout the week leading up to the game, Kyle Shanahan had been asked repeatedly about his time in Washington, something he has never shied away from pointing to as one of the most difficult stretches he has had in coaching.

Shanahan, who was the offensive coordinator under his father in Washington from 2010 to 2013, made headlines on Wednesday when he was asked what he liked and didn't like about his time with the Redskins.

"Being able to work with my dad and be around some other good coaches," Shanahan said Wednesday.

"Everything else," Shanahan said.

Shanahan also insisted that Sunday's game wouldn't mean much more than any other game. Still, it was clear he hadn't forgotten the tumultuous time he spent in Washington.

Aside from an NFC East division title in 2012, the Shanahans' time in Washington was mostly marked by controversy surrounding the team. The Redskins did not have a winning record in any of the other three seasons the Shanahans were on staff, and Kyle Shanahan has previously made it clear that he didn't care for the how the organization was run, nor the trade for and subsequent handling of quarterback Robert Griffin III, among a variety of other issues.

After Sunday's rain-soaked victory, Shanahan was again asked if this game meant a little more, and he acknowledged that perhaps it did, at least a little bit.

To be able to even have a game ball to give out, Shanahan and the Niners had to survive a torrential downpour and frisky Washington team that started the game by running it right at San Francisco's defense.

The rain in the Washington, D.C., area began overnight and carried throughout the day, only slightly letting up late in the game, according to 49ers players. The wind and rain, along with what is already known as a sloppy field at FedEx Field, made for what Shanahan called "as bad of weather that we have played in since we've been here. Combined with that field, just how that field always is. It's really tough for anyone to move."

That made the ball difficult to grip for both teams and put the defenses at a distinct advantage as neither team managed any points in the first half. That made the Niners the first team since the 2011 Packers to be 5-0 and enter the second half scoreless, according to ESPN Stats & Information research.

The conditions left 49ers cornerback Richard Sherman declaring the Niners the "2019 Mud Bowl champions" and noting that the field wasn't exactly in good shape in his last trip here, a 2013 NFC wild-card game during which it had also rained and then-Washington quarterback Griffin suffered a torn ACL in the fourth quarter.

That didn't keep the 49ers from finding a way to enjoy moving to 6-0 for the first time since 1990. After a long day without many pass-rushing opportunities, rookie defensive end Nick Bosa sacked Washington quarterback Case Keenum on the game's final play.

Unlike his premeditated "flag-waving" celebration against Baker Mayfield and the Browns on Oct. 7, Bosa just went with the moment and performed a belly-flop slide into a mud angel toward the sideline. Soon after, many of his teammates joined in.

"It kind of just came to me right away," Bosa, who now has four sacks on the season, said. "I was like, 'Oh, gotta slide.' I slid way further than I thought I was gonna slide, though. I looked back and saw the D-line sliding. It was a pretty good ending."
Report a correction or typo
Related topics:
sportsespnwashington redskinssan francisco 49ersnfl
Copyright © 2020 ESPN Internet Ventures. All rights reserved.
More Videos
From CNN Newsource affiliates
TOP STORIES