Andy Murray miffed after mistakenly having to serve with women's ball 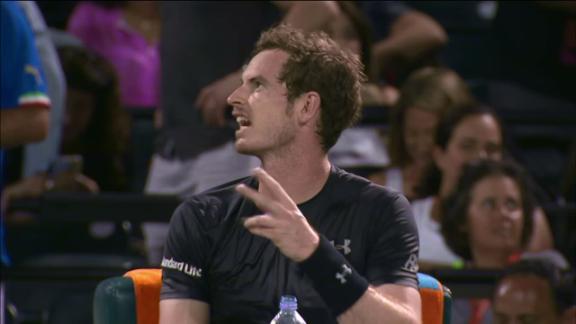 Andy Murray advanced to the third round of the Miami Open on Saturday night, but it wasn't without a little controversy.

The world No. 2 felt he was mistakenly given a women's ball while serving on break point in the second set against Denis Istomin, leading to a brief but heated back and forth with chair umpireMohamed Lahyani.

"It's unacceptable to have one of those balls," a visibly upset Murray said after losing the point.

The Scottish star lost the game but immediately broke back in an eventual 6-3, 7-5 victory.

After the match, he was asked about the incident.

"It was just a women's ball," said Murray, who believed the ball had possibly come from one of the flower beds around the court. "I saw it just before I was about to serve. It's quite off-putting because I just missed two balls long. I didn't know if that was one of the balls I used in the last couple points. The women's balls are very different to the men's balls. They're much quicker, smaller, livelier.

"Yeah, when you're just about to serve at break point down, you know, you don't want to be using a completely different ball. So I was just a bit frustrated with that because I didn't know potentially if one of the points before I had used it or not."

Men and women use the same size balls and each have equal pressure. In most events, including Miami, men use extra-duty felt, which slows the overall speed; women, meanwhile, use regular-duty felt.

Murray, though, said he could tell it was a women's ball because the Penn logo was in red; with men's balls, the logo is in black.

The chair umpire told Murray during the match that it was impossible for him to see the logo from his vantage point. Murray, though, said he thought the official at least could have told the crowd what was happening.

"I said to him, 'Say to the crowd, because I look like I'm complaining for nothing just now, and I've got the wrong ball that I'm about to serve with at break point,'" Murray said.

"Yeah, he obviously didn't say anything. It's not his fault. He can't see if it's a women's ball or not. But for the player, it's obviously difficult."

The confusion over the balls capped a week in tennis centered around the men's game versus the women's game. Last Sunday, Indian Wells CEO Raymond Moore said women players ride the coattails of the men. He later apologized, but his remarks drew widespread outrage and he resigned one day later.

Novak Djokovic also got into hot water when he suggested men deserve to be paid more than women. Djokovic later attempted to clarify his remarks but not before several players -- including Murray -- criticized the world No. 1.