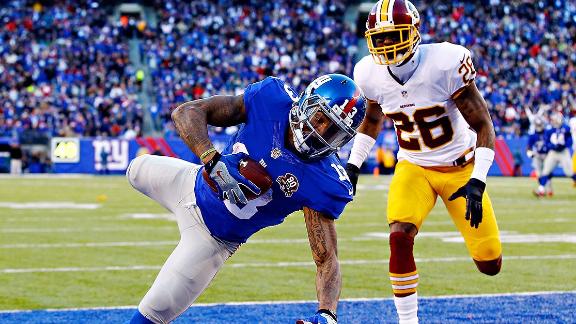 GLENDALE, Ariz. -- New York Giants rookie wide receiver Odell Beckham Jr., who had so many athletic catches that he inspired T-shirts and all forms of Internet creativity in his rookie season, revealed after Sunday's Pro Bowl that he is still affected by a hamstring injury that kept him out of much of the Giants' offseason program, training camp and the first month of the regular season.

Beckham, who still closed out 2014 with 91 receptions for 1,305 yards and 12 touchdowns, missed the first four games of the season and didn't have a game with more than four receptions until Nov. 3 when he had eight catches for 156 yards against the Indianapolis Colts.

"I was never fully healthy," Beckham said following Team Irvin's 32-28 win over Team Carter in the NFL's all-star game. "... I was just trying to manage it and maintain it. ... It's still not right. [I'm] still working on it."

Beckham added it was a "long process" for his recovery.

The Giants' first-round pick from the 2014 draft (12th overall) finished Sunday's affair with five receptions for 89 yards for Team Irvin, including a full-layout 48-yard catch on a pass from Detroit Lions quarterback Matthew Stafford in the first half.

Beckham added after Sunday's game that he had actually suffered two hamstring injuries before the season -- one in an early-offseason workout and another in a preseason game. He said he intends to rest in the coming weeks to try to get his leg feeling better.

"Man, if he said he wasn't full speed, that will get your attention," Harris said. "He looked pretty full speed to me."

Beckham, an accomplished soccer player growing up, kicked a 45-yard field goal during warm-ups for Sunday night's game and had early-arriving fans cheering with his one-handed catches.