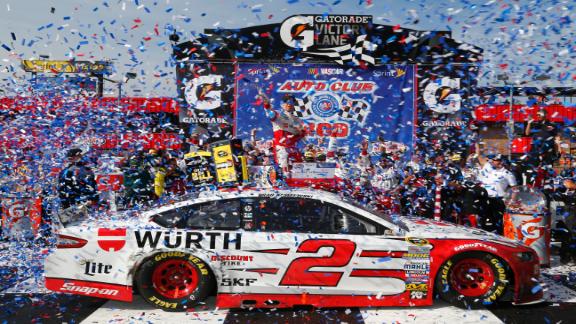 FONTANA, Calif. -- While Kevin Harvick chased Kurt Busch down the stretch in a battle of the best cars in the Fontana field, Brad Keselowski was buried in 17th place -- until the yellow flags started flying.

A caution for debris allowed Keselowski to move up to sixth. When a second flag went up, he took four new tires while Harvick and Busch got only two.

Keselowski burned that extra rubber all the way to Victory Lane.

Keselowski roared past Busch on the final lap and held off the streaking Harvick to win at Fontana on Sunday, earning his first NASCAR victory of the season in a wild finish.

"I knew [Harvick] and [Busch] had been the class of the weekend and deserved to win on speed," Keselowski said after his 17th career Sprint Cup victory. "Maybe we kind of stole one today."

Although their Team Penske Ford led only one lap, Keselowski and crew chief Paul Wolfe concocted a strategy to capitalize on the green-white-checkered finish after a caution for debris prevented Busch from cruising to a probable win. They made up track position under the first yellow flag, and Wolfe then made the winning decision after Kyle Larson's bumper flew off to cause another caution.

"Paul made the call to come down pit road and put four tires on, and I said, 'Well, this could either go really good or really bad,'" Keselowski said. "I didn't know which one it was going to be. Some guys stayed out, some guys took two tires, all kinds of different strategies."

"On the restart, we were just able to find our way through the lanes and get to the front there and somehow end up in Victory Lane leading the last lap there," he added. "That's kind of a race car driver's dream. This is one we're going to sit back and go, 'Wow,' for a while."

Keselowski slipped underneath Busch for the decisive pass, taking full advantage of the California speedway's wide racing surface. He had never finished better than 18th on this track, which he thinks is the best in NASCAR.

Although Greg Biffle crashed behind them during that final lap, NASCAR let the field keep racing while Biffle got his car off the track, and Keselowski finished strong.

"At the end, we caught some breaks and made the most of the breaks we caught," Keselowski said.

According to ESPN Stats & Information, since 1980, Keselowski is the only driver with two Sprint Cup wins in which he only led on the final lap, the other coming in April 2009 at Talladega.

Harvick fell just short of a three-race West Coast sweep, but finished second to extend his remarkable streak of top-two Sprint Cup finishes to eight races dating to last season. Only Richard Petty ever did it better, setting the NASCAR record with 11 straight in 1975.

"I hate that [Busch] wasn't able to hold on for the win there,'' said defending series champion Harvick, who leads Joey Logano by 28 points in the overall standings. "I would have loved to see those guys get their first win."

Busch and Harvick made the most of their superior Stewart-Haas Racing Chevrolets, and they likely would have cruised to a 1-2 finish before the first late caution led to another chapter in the thrilling races that have recently characterized the well-aged asphalt at Fontana.

Team owner Roger Penske praised Wolfe's decisive call on the tires as "perfect." Penske's team hadn't won a NASCAR race since 2002 on the track he built one hour east of Los Angeles two decades ago.

"Tires are worth a lot here," Wolfe said. "And once you put one lap or one heat cycle on them, you're pretty much looking to put new tires on and pick up quite a bit of grip."

Busch, who won the pole, finished third in his second race back from suspension, clipping the wall on his final lap in a desperate attempt to catch up.

He hasn't won since last March at Martinsville, but has two top-five finishes since his return from a three-race ban. Busch's girlfriend accused him of domestic assault, but he wasn't charged.

"We just got hung out on the yellows at the end," Busch said. "That last restart, I just didn't get the job done. Brad outmuscled us on four tires."