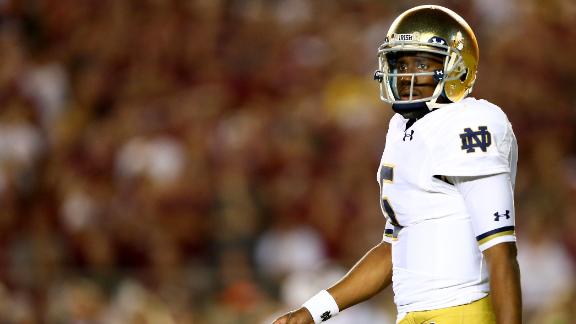 Notre Damecoach Brian Kelly adamantly disagreed with an offensive pass interference penalty that wiped away a go-ahead touchdown against Florida State, saying he had even less clarity Sunday than he did in the minutes after the 31-27 loss.

"Actually I have less clarity," Kelly said during his Sunday teleconference. "I guess it was actually called on Will Fuller, not C.J. (Prosise). So [it] just adds more uncertainty as to the final play.

"But again, the play itself, in terms of what we ask our kids to do, it was pretty clear what happened on the play: Florida State blew the coverage and they got rewarded for it. It's unfortunate."

The official play-by-play of the game states that Prosise was called for an offensive pass interference penalty on a 2-yard touchdown pass from Everett Golson to Corey Robinson on fourth-and-goal with 13 seconds left, which would have put the Irish ahead 33-31, with an extra point pending.

The infraction, however, moved Notre Dame back to the 18-yard line, and Golson was picked off by FSU'sJacob Pugh in the end zone on the Irish's final offensive play.

Kelly said he found out afterward that the officials had actually called the penalty on Fuller, and he said that the play was different from Notre Dame's first touchdown play -- a 1-yard pass from Golson to Robinson -- that drew plenty of comparisons.

Kelly said he thinks there was nothing Fuller could have done differently on the play.

"No, I think he's working back inside and he did not go out of his way to impede the defender," Kelly said. "The official that was furthest from the play that had the ability to see it, saw it differently. That's the way it goes."

Asked about the Seminoles' approach to the play, Kelly offered a lengthy breakdown.

"All right, so he was on the point, we were in a bunch situation," Kelly began. "First of all, it's my understanding now that Will Fuller was called for the penalty, not C.J. So C.J.'s job is to get into the end zone and turn around and be a big target. He was immediately grabbed at the line of scrimmage. He's trying to get depth into the line of scrimmage, into the end zone so Corey can clear a path. And so as that contact was being made, it was seen, I guess -- I don't know who saw it as interference -- but you've got two guys that are trying to fight for space. We saw it as such.

"He's supposed to find space, sit down and be a target. Again, it's a play that's a pretty common play in NCAA football -- where you're setting a point, guy turns around and the ball is thrown. The ball was thrown quickly, C.J. didn't even have a chance to turn around -- which may have led to some of the objects that people were talking about on TV, that he was blocking -- but he was simply trying to get his space in the end zone. And then of course now we're hearing that it was actually called on Will Fuller. So it's hard for me to really put it all together."

An ACC official told ESPN's Brett McMurphy the league does not have any comment regarding Kelly's remarks.

ButACC's head of officials, Doug Rhoads, was at the game and maintained the call in dispute was correctly made.

Rhoads sought to "bring clarity" to the callin a video posted to the conference's website.

"Officials always have to exercise great judgment in calling a foul -- an offensive pass interference or 'pick plays' as they're sometimes referred to are no different than other difficult judgments," Rhoads said. "The key element is the official must assess on the play if there is sufficient restriction for it to be a foul. He has to differentiate between incidental contact and significant contact, or significant restriction, before he calls that foul."

Kelly said he had yet to speak with the ACC about the call but added: "We'll have our conversations with the supervisor of officials for the ACC here a little bit later this afternoon and I'm sure we'll get even less clarification."

Kelly said he did notice that FSU cornerback P.J. Williams took his helmet off right after Robinson's wiped-out catch, a gesture that did not draw a penalty.

"Yeah, they said that they missed the call," Kelly said. "They said they just missed it."

Defending national champion Florida State (7-0) extended its winning streak to 23 games and remained at No. 2 in the Associated Press poll. Notre Dame (6-1) dropped two spots to No. 7.

Both teams have byes this coming weekend.

"There's great disappointment, but they know that," Kelly said of his players. "You never want to let a game be decided by a referee. You want to control the game yourself, and what happened at the end was out of our control. We feel like we did the things necessary and we've got to be able to control finishes, and that means make a couple more plays.

"If you've got the champs, you can't win by a split decision. You've got to knock them out, and I think that's what we want to take away from this."

The Call That Sealed The Deal For FSU
Keyshawn Johnson discusses what Notre Dame could have done to avoid the offense pass interference call that negated their go-ahead TD with 13 seconds to play vs. FSU. 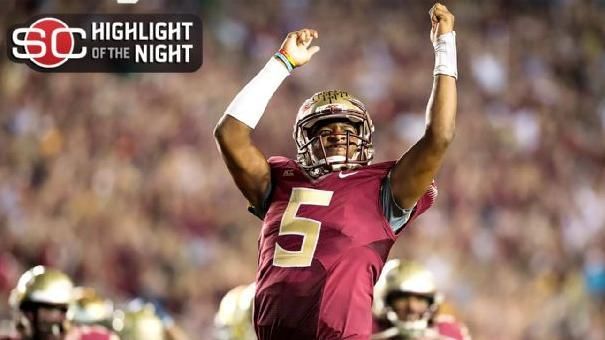 FSU Survives ND
Highlight Of The Night: After trailing five times, Florida State held off Notre Dame on the final drive -- with the help of a flag -- for a 31-27 victory.