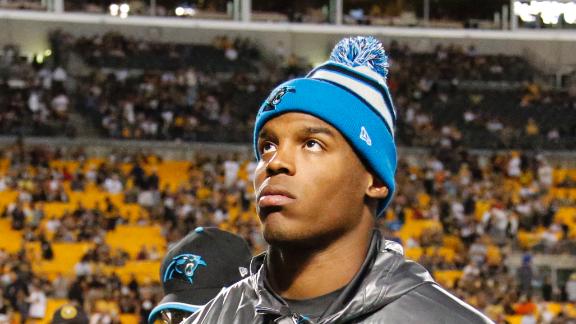 CHARLOTTE, N.C. -- Quarterback Cam Newton won't put himself or the Carolina Panthers at risk if the fractured ribs suffered two weeks ago prevent him from playing his accustomed style, but he remains confident he'll be ready for Sunday's opener at Tampa Bay.

"I'm not going to put my team in jeopardy or put myself in jeopardy to make matters worse,'' Newton said Thursday.

Coach Ron Rivera agreed that his two-time Pro Bowler was on pace to start, but he said the final decision likely won't be made until Sunday.

Newton did not practice Wednesday and was limited Thursday, but he has taken all the first-team reps during walk-throughs when game installations are made.

Rivera wouldn't say whether Newton threw Thursday. Newton, who did not throw during the first 20 minutes practice was open to the media, said he did "what I was coached to do.''

"My day was kind of weird but interesting,'' added Newton, who was wearing a flak jacket with added padding under the back right side where the injury occurred.

Rivera, who has been adamant all along that Newton will play, said he'll listen to what Newton, trainer Ryan Vermillion, general manager Dave Gettleman and others have to say before making a final decision on his franchise quarterback.

"It's not just about Game 1, also,'' Rivera said. "Let's be realistic. This is not a sprint, this is a marathon. You may not start as fast as you want, but at the same time, you have to start smart."

Newton plans to be smart about it, as well. If he doesn't feel he is well enough to help the team, or that he will hurt the team by playing, he plans to be honest.

"I don't want to ever put this team or myself in jeopardy that I'm just stressing to hurry up and get out there and I'm not able to be what makes me, me,'' Newton said.

The first pick of the 2011 draft, Newton has rushed for more yards and touchdowns than any quarterback in the NFL the past three seasons. According to ESPN Stats & Information, Newton has been hit 467 times -- more than twice of any other quarterback.

"But we're not going to make a story out of that, because I am human,'' he said. "We all understand our limits, we all know what we can and can't do. Like I told coach, and I want to confirm it to everybody, I will not put this team at risk to hurt it by anything.''

Rivera has been emphatic all along that he will not change the game plan because of Newton's injury. A big part of Newton's game is the read-option and scrambling.

"I only know how to play this game how Cam Newton plays the game,'' Newton said. "Fault me for it, kill me for it. Do whatever you want to.

Newton admitted it's been frustrating not being able to practice, not only for most of the past two weeks, but much of the offseason -- first because of March surgery on his left ankle and then the rib injury suffered in an Aug. 22 exhibition game atNew England.

"It's frustrating, because you know it's a good car. This car has got you to this point. Now it's like everything is happening. The thing is, you keep messing the car up, and you're not even driving it. ... That's the most frustrating part. I didn't have no injuries when it came to the actual season, and that's what I can't come to grips about.''

But since talking to reporters last Wednesday, Newton said there's no doubt he will be ready to start against Tampa.

"That's my thinking,'' he said. "Every day I have an opportunity. Now we have days. And in a couple of days, it will be down to hours. And then the hours will be down to minutes. And hopefully, when that clock starts, I will be on the field.''

Panthers Need Newton At His Best
ESPN Panthers reporter David Newton breaks down why the team isn't planning to make any adjustments to accommodate for QB Cam Newton's rib injury.