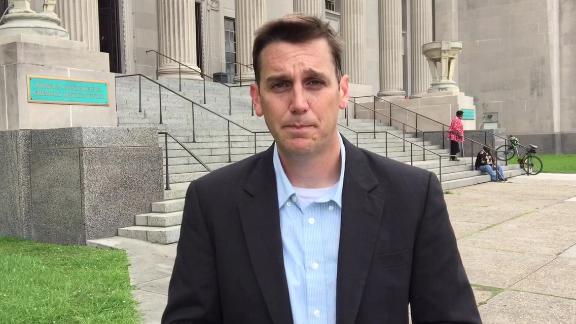 NEW ORLEANS -- Will Smith's shooter, Cardell Hayes, told police officers that he felt threatened by the former New Orleans Saints defensive end and believed Smith was going to retrieve a gun from his car when he shot and killed Smith on the night of April 9.

"He's got a gun, I'm gonna go get my gun," Hayes can be overheard saying in describing his version of what Smith had said, in a 911 call made by off-duty police officer Christopher McGaw. "What was I supposed to do?"

Hayes' own words were played in court for the first time during a Friday hearing, which included the audio clip of Hayes speaking to McGaw on the scene and a video clip of Hayes' first discussion with homicide detectives.

Hayes said he exited his vehicle with his gun in hand during a heated argument with Smith and others in Smith's party after a pair of traffic incidents. Hayes made no mention of seeing a gun in Smith's possession in either of his recorded conversations.

But Hayes said he acted in self-defense, claiming that he was surrounded by three or four people at one point and that Smith hit him three times before eventually heading toward his own vehicle, with a woman trying to hold Smith back.

Later, Hayes told homicide detectives, "I can't have my life taken away from me for nothing," and said of Smith and others in his party, "I don't know what they were on or what they were drinking."

Friday's hearing offered a sneak peek of Hayes' trial, which is scheduled to begin Sept. 20.

The trial date was scheduled Friday after Judge Camille Buras rejected motions to reduce Hayes' $1.75 million bond and to suppress his early statements to police.

Hayes has been charged with second-degree murder in the slaying of Smith and with the attempted murder of his wife, Racquel Smith. Will Smith was shot eight times -- seven in the back -- and Racquel was shot twice in the legs.

One of the prosecutors, Jason Napoli, described it as a case of somebody who took a "fender-bender," escalated it and decided "some warped theory of the law justifies him shooting Will Smith eight times."

Hayes' lead attorney, John Fuller, said he was not surprised by any of the testimony or the judge's rulings.

Fuller acknowledged his client's claim of self-defense in open court for the first time Friday, though he has hinted at that strategy all along by insisting that Hayes was not the aggressor on the night of the shooting.

When asked if the fact that Hayes was carrying his gun when he exited his vehicle hurts that claim, Fuller said, "Not if you know why he exited with his gun."

McGaw was the first person to testify Friday. He happened to be on the patio of a nearby bar and restaurant when he heard the sound of a car crash and a loud argument between multiple parties. Hayes had a passenger with him, while Smith had three other passengers in his car, and another acquaintance was in the car in front of Smith.

McGaw approached the scene and said he believed he saw a gun in the hand of the passenger of Hayes' vehicle. McGaw then heard gunfire but did not see the gun that was fired. He could not see Hayes or Smith from his vantage point.

After ducking away during the gunfire, McGaw then approached the people on the scene and said he asked what happened -- not identifying himself as a police officer.

McGaw said he found Smith's body slumped over the driver's seat with his feet pointed toward the inside of his vehicle, with his right hand extended toward the glove box.

Hayes, in his later conversation with homicide detectives, mimicked things Smith was saying to him, including, "What you gonna do with that gun?" and pointed out that he didn't shoot Smith even though Smith hit him three times. Hayes said he told Smith or others to "back up." And Hayes said he told Smith, "Don't do that," when Smith appeared to be going to his car for a gun.

Fuller said it was "illuminating" that Hayes told officers on the night of the incident that Smith and others appeared to be "drunk or on something," and added that Hayes' assessment was backed up by the results of Smith's toxicology report earlier this week. Fuller confirmed reports that the toxicology report indicated Smith had a blood alcohol content that was, according to a source, nearly three times the legal limit at 0.235.

The attorney for Smith's family, Peter Thomson, said earlier this week that nothing in the toxicology report would change the fact that Will and Racquel were the victims.

"I think the facts presented today in criminal court speak for themselves," Thomson added on Friday. "Hence, we remain very confident that the defendant will be convicted of the murder of Will Smith and the attempted murder of his wife, Racquel."

All parties agree that Smith's shooting followed a pair of traffic incidents shortly before midnight on Saturday, April 9.

The first came when Smith's vehicle appeared to bump into the back of Hayes' vehicle after Hayes stopped in the middle of the street, based on video from nearby surveillance cameras. As Hayes began to pull over to the side of the street, Smith drove away.

Then, a few blocks later, Hayes' car crashed into Smith's car, leading to the altercation. The two sides have disagreed about whether Hayes intentionally crashed into Smith. The prosecution said Friday that Hayes' vehicle was traveling more than 20 miles per hour before the crash.

While arguing for the reduced bond, Fuller said the case is "50-50" and "a legitimate self-defense case" rather than an open-and-shut case of guilt. He called Hayes' pastor to the stand to speak to Hayes' ties to the community. And he said Hayes' actions after the shooting -- setting his gun down on the hood of his car and waiting for police -- showed he is not a flight risk.

Fuller also suggested that it remains unclear whether Hayes was the one who shot Racquel since the bullet fragments have not been recovered from her body.

Napoli, however, said it is "completely disingenuous" for Fuller to suggest that it's possible the shots to Racquel's legs could have come from any other gun. Napoli said all of the projectiles and casings recovered match Hayes' gun, and Hayes never mentioned anyone else having a gun in his statements.

When Fuller was asked directly if he believes someone else shot Racquel Smith, the attorney said only that his client is not guilty on each of the four charges against him, which also include aggravated criminal damage and aggravated criminal assault with a firearm.

Judge Buras estimated the trial will last about two weeks. The next discovery hearing is set for July 14.