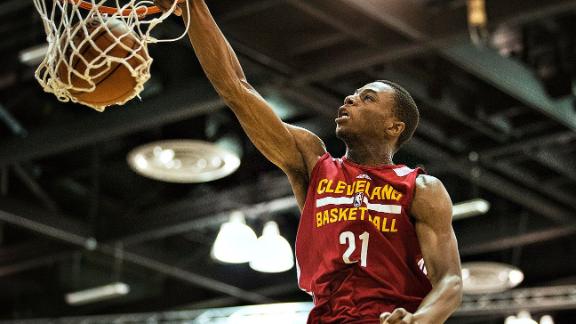 The Cleveland Cavaliers are planning to sign No. 1 overall draft pick Andrew Wiggins to a contract in the coming week, according to sources close to the process.

Sources told ESPN.com that the Cavaliers' delay in signing the former Kansas star has nothing to do with the prospect of Wiggins being dealt to the Minnesota Timberwolves as part of Cleveland's ongoing trade discussions for Kevin Love.

The Cavaliers, sources say, are merely exploring options for using their estimated $1.4 million in remaining cap space before signing Wiggins to a contract that will pay him in the neighborhood of $5.5 million as a rookie.

The Cavs and Timberwolves have been discussing a Love trade since the return of LeBron James, with sources saying that Minnesota is insistent on getting Wiggins back in any deal that sends Love to Cleveland.

Once Wiggins signs, though, league rules stipulate that the Cavs must wait 30 days before trading him.

One option under consideration for the Cavs, sources say, is using their leftover salary-cap space to create long-term contracts for recent second-round picks Joe Harris and Dwight Powell. Signing Wiggins first would preclude such moves.

The Cavs' delay in formalizing Wiggins' contract has garnered extra attention because of the Love factor, but the reality is that this process is a fairly routine bit of salary-cap management that takes place this time of year with draft picks.

Once the Cavs exhaust their cap space and sign Wiggins, they are expected to officially sign free agent Mike Miller to a two-year, $5.6 million deal. The Cavs will be signing Miller with their $2.7 million "room" exception, which can only be used after teams that previously had salary-cap room use it up.

The Cavs also remain interested in free agent Ray Allen, who is being recruited to Cleveland by former teammates Miller and James. But Cleveland will only be able to offer him a $1.4 million veteran's minimum contract.

Allen, who turned 39 on Sunday, has been traveling on a Nike promotional trip in China for the past week as he considers his options for the future.