Chargers: No bending to pressure 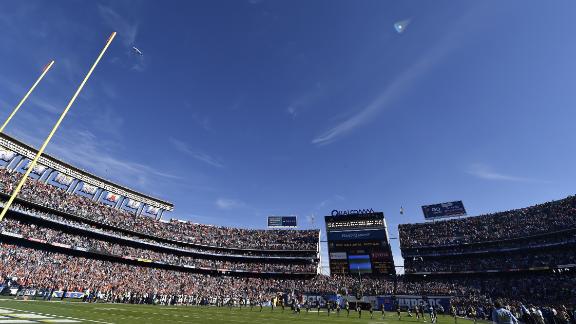 SAN DIEGO -- Meeting with San Diego Mayor Kevin Faulconer's nine-member stadium advisory group for the first time this week, representatives of the San Diego Chargers provided a blunt assessment on the city's effort to build a new NFL stadium that would keep the team in San Diego -- come strong or stay home.

Mark Fabiani, the team's point person on the stadium issue, provided a copy of the remarks that the Chargers presented to the advisory group in a private session on Monday.

"It would not be fair to the Chargers -- a team that has worked for 14 years to find a stadium solution in San Diego County -- to allow other teams that themselves abandoned the L.A. market to now return and gut the Chargers' local revenue stream," Fabiani said.

In the six-page letter, Fabiani emphasized the team's effort to get a new stadium built in town, and the potential threat of the St. Louis Rams or Oakland Raiders moving to the Los Angeles market, where the team says 25 percent of its ticket base originates from.

In January, a developer and a company operated by Rams owner Stan Kroenke unveiled plans to build an 80,000-seat stadium in Inglewood, California, on land he owns near Hollywood Park.

Los Angeles has not had an NFL team since the Rams and Raiders departed for St. Louis and Oakland in 1995. Both teams have the ability to terminate their lease at the end of the 2015 season.

Fabiani said they've spent more than $15 million dollars on the team's effort to get a new stadium built in San Diego.

While keeping an eye on what happens in Los Angeles, Fabiani said the Chargers remain committed to finding a solution for a new stadium in San Diego, and will work with the task force to arrange the participation of NFL executives at a future meeting so the group can speak directly to league officials.

But Fabiani challenged the city and the group to come up with a real-world solution to the stadium issue, stating that the cost of a new stadium could exceed the estimated price tag of $1.2 to $1.5 billion.

Faulconer's spokesman, Matt Awbrey, said Fabiani's call for a tax increase to finance a stadium was "one option, but it's not the only way or even the best way to replace the aging Qualcomm Stadium."

"Today Mr. Fabiani talked about the possibility of the team moving to Los Angeles while also calling for a tax increase to finance a stadium in San Diego," Awbrey said in a statement.

"We invite Mr. Fabiani be open to other solutions and to join the community and fans that want to keep the Chargers in San Diego."

Fabiani said in his statement that 25 percent of the Chargers' season-ticket base comes from the Los Angeles-Orange County market.

"If another team -- or two teams -- enters the L.A./Orange County markets, most of that Chargers' business there will disappear," Fabiani said. "This will put the Chargers at a significant competitive economic disadvantage."

The Chargers' push for a new stadium has coincided with various political and financial upheavals at City Hall. Qualcomm Stadium has fallen into disrepair and lacks the modern amenities the team says it needs to compete financially with other franchises.

Fabiani said the group "should resist the political pressure to make a proposal simply for the sake of making a proposal."

He said the pressure on the Chargers has intensified because of developments in LA.

"But after all these years of work, we also understand this: It might be that ... there is at least at this time no publicly acceptable solution to the stadium issue in San Diego. If the facts lead you to this conclusion, we hope you will say so, even though you will be under tremendous political pressure to propose something -- anything -- just to show that the politicians are trying."

He suggested the task force's work be subjected to "serious, real-world stress tests," including whether a stadium proposal had a chance of being approved by two-thirds of the voters.

Many people feel that a financing plan that would require a two-thirds vote would fail.

Adam Day, chairman of the advisory group, said the Chargers met with the task force for about an hour. The group is tasked with looking at a downtown spot next to Petco Park and the Qualcomm Stadium site as potential locations for a new stadium, along with figuring out a financing plan to pay for a new facility.

"I thought it was cordial meeting," Day said. "It was certainly productive and collaborative. This is the first of a number of meetings we will have with Fabiani and other people within the organization. It was very productive."

Chargers president Dean Spanos did not attend the meeting because he was on vacation, with the meeting taking place on a holiday. However, Day did not view the team owner's absence as an issue.

"We certainly invited Mr. Spanos, I think it's safe to say," Day said. "But there's been one constant in the last 13 years during this process, and that's Mr. Fabiani. His willingness to meet and participate was very important for us."

Day said that other potential users of a new stadium, like San Diego State University, will be invited in the near future to speak to the group. Day also said the group will be announcing this week plans to hold a public forum for citizens to weigh in on the project.