Colin Kaepernick: New 49ers staff not asking him 'to do things outside of my character' 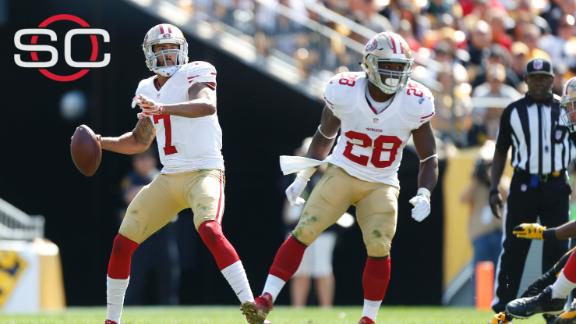 ESPN
By Paul Gutierrez
SANTA CLARA, Calif. -- There were whispers, when there were not full-blown rumblings, that Colin Kaepernick was the proverbial square peg being forced into a round hole last year by former coach Jim Harbaugh and then-offensive coordinator Greg Roman.

And Wednesday, the San Francisco 49ers quarterback brought up the topic on his own, when asked what he thought first-year coach Jim Tomsula meant when he said Kaepernick was not being asked to do anything new.

"I would say the biggest thing is I'm being asked to be myself this year," Kaepernick said. "And I don't think anyone knows how to be myself better than me. So it's a comfort zone for me. It's a situation where I'm not being asked to do things outside of my character."

Meaning he feels as though he was asked to do things outside of his character before?

"Outside of how I would normally handle situations, yeah," Kaepernick said.

Kaepernick was then asked whether he was talking specifically about being in the pocket more or being told to not go outside the pocket.

"No," Kaepernick said. "I'm getting at that I was asked to do things outside of my character."

And with that, before any more questions could be asked, Kaepernick thanked the media and walked off the stage.