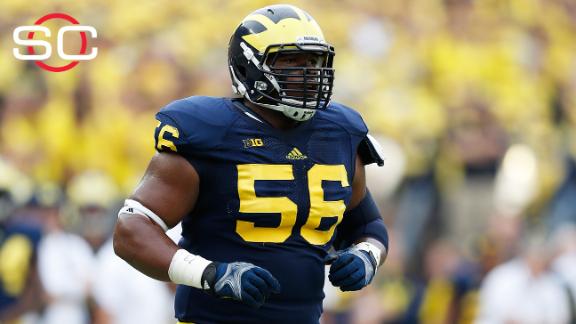 Defensive lineman Ondre Pipkins told ESPN that Michigan coach Jim Harbaugh, head athletic trainer Paul Schmidt and associate athletic director Jim Minick asked Pipkins about 10 times over a two-month period to sign a medical scholarship form that would have ended his career with the Wolverines before he wanted it to end.

"I feel I'm healthy and ready to play," said Pipkins, who played last season after he was cleared to return from a torn knee ligament. "I don't want to sign the form. I wanted to play for my seniors and for the team. Coach Harbaugh said, 'I recommend you take the medical.'"

"College football is a business. New coaches have to win games. They want to go with guys they think can win. If I'm a victim of making room, so be it. But if there is no concrete reason to disqualify a player, he should have the right to keep playing."

Pipkins said doctors initially told him he has some arthritis in the knee but that he should not be disqualified from competition. But as pressure continued from others within the program to sign the medical form, he was sent by Michigan back to his knee surgeon, who then recommended he rest his body for six months.

"After consulting with our medical team, we do not think it is in Ondre's best interest as it relates to his health and welfare to play football, short or long term," Harbaugh said in a statement given to ESPN on Friday. "He remains on full scholarship and counts toward the 85-scholarship limit in pursuit of graduation from the University of Michigan."

For years, scholarships have been renewable on a yearly basis -- many now are guaranteed for four years -- but when a player signs a medical scholarship form and retires, it opens an available scholarship for another player.

Pipkins, who said he plans to transfer for his senior season, said the scholarship he earned in 2012 was for four guaranteed years, meaning the school could not "cut" him for performance reasons. Players who retire for medical reasons are also allowed to complete their education on scholarship.

According to Pipkins, Harbaugh said he wanted "to make sure you graduate from Michigan," and the coach did not plan to invite Pipkins to fall camp due in part to medical concerns. The lineman added that Harbaugh said he did not believe he would be drafted into the NFL for medical reasons.

"I feel bad I wasn't able to complete this journey with my classmates," Pipkins told ESPN. "I feel I am healthy and without pain. I believe Michigan wanted to free up the scholarship. I felt I was practicing well and could compete at a high level at the nose tackle and tackle positions."

Pipkins said he participated in spring camp before suffering a concussion, for which he said he's been fully cleared by a neurologist, and he was welcomed back to the team by defensive coordinator D.J. Durkin. It was Pipkins' second concussion with the Wolverines; he said he also suffered one as a freshman.

However, Pipkins said he still felt unwelcome. After being pulled from a workout at the team facility -- he was told it was to avoid injury -- Pipkins said he was later told he could work out, but not with teammates.

"Schmidt told me, 'Call it quits. Hang it up.' He said, 'You've had a good run,'" Pipkins said of the Wolverines' head athletic trainer.

After showing up to work at a camp for children with his teammates and coaches, Pipkins said he was confronted by Minick and told that he needed to meet with Harbaugh.

"'I need you to sign this,'" Pipkins said Harbaugh told the lineman regarding the medical form. "'It's not fair to your teammates. Let's get it done.'"

Pipkins said he knows of at least one other Michigan player who has been told that he must "get healthy by a July 1 deadline or sign a medical to retire."

He said he was told this week by Michigan that -- at his request -- he could have contact with Oklahoma State, Georgia State, TCU, Tennessee, Florida State or Washington State concerning a transfer.

But Pipkins said he knows he may have to play at a lower division -- such as an FCS program -- if a school is unwilling to place him on scholarship for two years to play one.

"All I want to do is play football," Pipkins said. "I tried to finish my career at Michigan, but I wasn't given the chance."