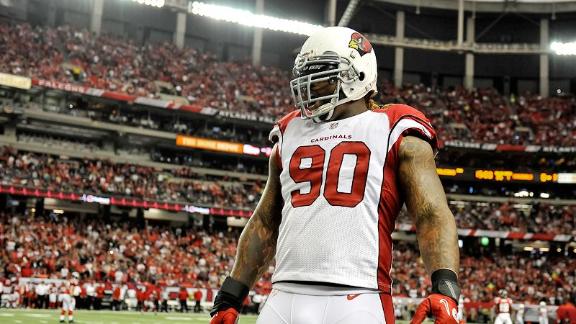 TEMPE, Ariz. -- With Darnell Dockett and Karlos Dansby anchoring their defense, the Arizona Cardinals were No. 1 against the run in 2013. But Dansby jumped at a four-year, $24 million free-agent deal from Cleveland, and nearly two months later, Dockett still isn't happy about it.

"He chased the money," Dockett said. "I got a lot of respect for our guy that left. I love him like a brother, but we was one or two pieces away from really making a lot of noise. But we're going to regroup."

Speaking to the media Thursday during an open strength and conditioning session, Dockett, who came into the league with Dansby in 2004, didn't mention Dansby by name.

After spending the first six years of his career with Arizona, Dansby signed with Miami in 2010 and spent three seasons in South Florida. He returned to the Cardinals last offseason and had one of the best seasons of his career in 2013 while earning $2.25 million.

But throughout the season, Dansby talked about getting paid. His contract with the Browns will pay him $10 million in 2014 and includes $12 million guaranteed, according to ESPN. Arizona was reportedly offering that for two years.

"I personally feel like he chased the money versus chasing a ring," Dockett said. "No knock toward Cleveland. I don't want people to think I'm saying Cleveland don't have a chance. Everyone has a chance. But I just felt like it was made for him to be here. Again, the financial part is totally different. I don't know anything about that."

Dockett's disappointment extends beyond Dansby taking the money and running.

"When you look at everything we've done this year, the sacrifices our defensive line made for that certain individual to make his plays, and go into a game not being selfish, we don't care ... our defensive line don't care about sacks and tackles and stuff," Dockett said. "We're coming to do a job, to hold guys off our linebacker so we can be the No. 1 run defense.

"I just think that our opportunity was to be right there and to really get into the playoffs and make a run for it. We're not going to complain about spilled milk. I'm going to wish him well in Cleveland, and we'll see who's where at the end of the season. That's our goal, and that's our motivation."