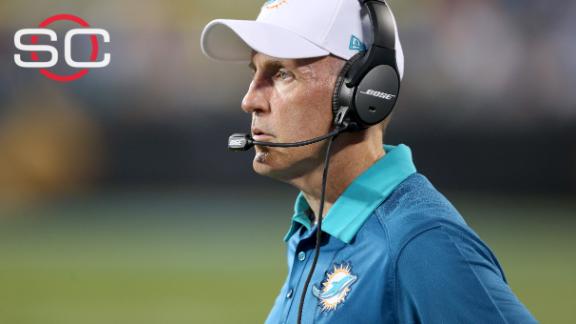 DAVIE, Fla. -- The Miami Dolphins fired coach Joe Philbin on Monday after a 1-3 start to the season.

Philbin, 24-28 in Miami since taking over in 2012, became the first head coach in the NFL to lose his job this season.

"This was a tough decision for me to make knowing how tirelessly Joe worked in his four years here to make this a winning team," Dolphins owner Stephen Ross said in a statement. "He is a man of the highest character and integrity that I developed a close personal relationship with.

"I am extremely disappointed with how we have started the season, but I feel confident that we can improve quickly with the talent we have on our roster."

Dolphins tight ends coach Dan Campbell will serve as Miami's interim head coach for the remainder of the season.

In a conference call later Monday, Ross said his goal "is still to make the playoffs. I felt this was the best opportunity we have" in naming Campbell the coach.

"I'm not here just to finish the season up,'' Campbell said Monday. "That's not my plan. We're coming here to win games. It's still early. We have time to turn everything around. But we can't wait.''

Ross added that Campbell is "certainly" a candidate for permanent head coaching job in 2016.

Campbell's plan to turn around the Dolphins includes holding tougher, more intense practices and coaching more aggressively on game days. Although Campbell said he has the utmost respect for Philbin, he explained that he will do things much different now that he's running the team. According to Campbell, there wasn't enough competition during Miami's preparation and that spilled over into the field.

"This is my sixth season with the Miami Dolphins, and this is the most talented roster we have had in those six years,'' Campbell said. "We have plenty of talent.

"I feel there's a lot more we can get out of these guys. We need to change the culture to where it is so competitive on Wednesday, Thursday, maybe even Friday, that it's intense and heated. We may have to break up a few [fights] -- that's when things get good. You can't go through the motions Wednesday and Thursday and turn it up on Sunday. It doesn't work that way.''

The Dolphins entered this year with high expectations but looked mostly uninspired and disorganized during their current three-game losing streak. Miami has been outscored 91-48 during that stretch.

Philbin met with Ross on Sunday in London after the Dolphins' 27-14 loss to the New York Jetsand said afterward that he was confident in his job security. Ross, however, had other thoughts once the team returned to the United States.

According to multiple reports, there was tension between quarterback Ryan Tannehill and the team's defense on Saturday during the team's walk-through in London. Tannehill, upset that his passes were intercepted by players on the scout team, said, "enjoy your practice squad paychecks," according to the reports.

According to the South Florida Sun-Sentinel, following an altercation that prompted the team's defensive players to go even harder after Tannehill, they were advised to no longer practice full speed and, in protest, stopped practicing completely when the quarterback took his snaps.

Philbin's firing marks the second straight season an NFL coach has lost his job following a lackluster performance at Wembley Stadium. In 2014, the Raiders fired coach Dennis Allen after his team was embarrassed by Philbin's Dolphins 38-14 in London.

On Sunday, the Dolphins lost to a Jets team coached by Todd Bowles, who was passed over for the Dolphins' coaching job in favor of Philbin in 2012. Bowles finished the 2011 season 2-1 as the Dolphins' interim coach after he replaced the fired Tony Sparano.

The Dolphins have struggled on both sides of the football this season. Miami is ranked No. 23 in total offense and No. 30 in total defense, including dead last against the run at 160.5 rushing yards per game despite the addition of Pro Bowl defensive tackle Ndamukong Suh. Philbin is 4-8 in his past 12 games dating back to last season.

Over the last three weeks, the Dolphins have faced quarterbacks Blake Bortles, Tyrod Taylor and Ryan Fitzpatrick, and lost to them all. Entering those games, those three quarterbacks had a combined career record as a starter of 38-68-1. According to ESPN Stats & Information, each put up a Total QBR of at least 89.8 against the Dolphins. Their QBRs against teams other than the Dolphins this season is 51.8 or lower.

Philbin survived the Dolphins' bullying scandal two years ago and the team's late-season collapses in 2013 and 2014. He received a contract extension earlier this year that will pay him through the 2016 season.

ESPN's Adam Schefter and The Associated Press contributed to this report.