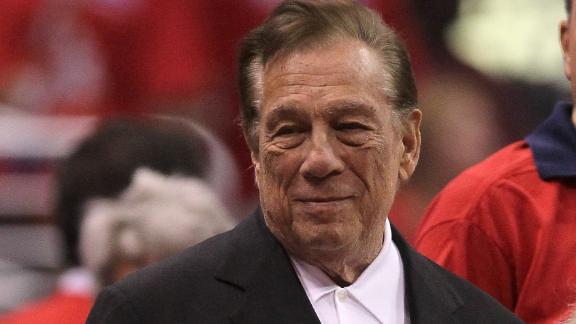 The banned Los Angeles Clippers owner has filed a lawsuit against the NBA asking for damages in excess of $1 billion.

The lawsuit was filed Friday in U.S. District Court in Los Angeles, just hours before the NBA announced that it had approved Shelly Sterling and the Sterling family trust's deal for the Clippers with former Microsoft executive Steve Ballmer, who bid href="http://espn.go.com/los-angeles/nba/story/_/id/11003237/former-microsoft-executive-steve-ballmer-submits-winning-bid-buy-clippers-according-sources" billion for the team. That deal now must be approved by the NBA Board of Governors.

"Mr. Sterling's lawsuit is predictable, but entirely baseless," NBA Executive Vice President and General Counsel Rick Buchanan told ESPN.com's Darren Rovell. "Among other infirmities, there was no 'forced sale' of his team by the NBA -- which means his antitrust and conversion claims are completely invalid. Since it was his wife Shelly Sterling, and not the NBA, that has entered into an agreement to sell the Clippers, Mr. Sterling is complaining about a set of facts that doesn't even exist."

As part of the sale agreement, Shelly Sterling and the Sterling family trust agreed not to sue the NBA and to absolve the league of litigation by others, including Donald Sterling.

Since the agreement between the NBA and Sterling trust was announced after the lawsuit was filed in court, Donald Sterling's attorney, Max Blecher, said he needed to review all the new information before proceeding.

"We gotta sit down and see how all of this affects us," Blecher told ESPN.com's Ramona Shelburne. "We have to think through the whole situation. ... She's saying if you sue us, we'll have to pay out of our own money. It's like suing themselves. We have to see whether the law allows to happen.

"We have not had a chance to analyze or do any legal research about it. There's a lot of stuff happening in a very compact period of time. Give us a break."

Blecher had told Shelburne earlier on Friday that the lawsuit addressed the "invasion of (Sterling's) constitutional rights, violation of antitrust laws, breach of fiduciary duty and breach of contract."

He said the lawsuit "had nothing to do with the sale."

Donald Sterling repeatedly has vowed to fight the NBA's attempts to force him to sell the team. That fight was temporarily derailed this week after sources say he was found by experts to be mentally incapacitated, paving the way for Shelly Sterling to become the sole trustee of the family trust and empowering her to work on an agreement to sell the team to Ballmer.

Earlier in May, two neurologists conducted a number of brain tests on Sterling, 80, at the urging of his family, a source said. Their diagnosis was that he was suffering from Alzheimer's disease, and likely had been for "three to five years."

Sterling's side, as well as his wife's attorneys, had known of the tests' results for some time, the source said. The family trust has rules and guidelines regarding mental incapacitation, which it defined as an inability to conduct normal and regular business affairs.

Earlier Friday, Blecher confirmed in an email to ESPN that evaluations were performed on his client but said the results of the neurologists' examinations were "grossly exaggerated" and that "Mr. Sterling is far from mentally incompetent." In similar comments to CNN, Blecher said it was determined that Sterling had "modest mental impairment" or "a slowing down."

Shelly Sterling and her advisers initially had hoped to sell the team without using her husband's incapacitation as a reason, according to sources. However, when Donald Sterling said in his response to the NBA that he intended to fight the sale of the team, they changed course and signed an agreement to sell, citing the terms of the trust.

The rules of the trust did not require a court hearing first to declare that Donald Sterling is mentally incapacitated. That allowed Shelly Sterling to negotiate directly with Ballmer and the league to sell the team.

ESPN.com's Ramona Shelburne and Darren Rovell contributed to this report.