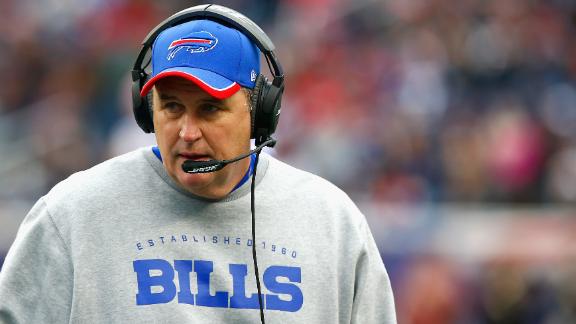 The Jacksonville Jaguars have hired former Buffalo Billscoach Doug Marrone to be an assistant head coach for offense and offensive line coach.

Marrone went 15-17 in the past two seasons with the Bills before opting out of his contract earlier this month because of uncertainty over possible organizational changes. The clause in his contract that allowed him to do that also guaranteed his $4 million salary in 2015.

He interviewed for head coaching jobs with the New York Jets, Chicago Bears and Atlanta Falcons but didn't receive an offer from those teams.

Marrone's hiring means offensive line coach George Yarno will not return to the Jaguars in 2015, according to a team spokesman. The Jaguars announced on May 29 that Yarno had been diagnosed with cancer and he continues to receive treatment. He remains under contract.

The Jaguars play the Bills next season in London on Oct. 4.

Running back Fred Jackson referred to Rex Ryan as "an upgrade'' at coach. And Ryan said during his introductory news conference that the Bills deserve to have a loyal coach -- a clear shot at Marrone.

Marrone stepped down after leading the Bills to a 9-7 finish. It was the team's first winning season since 2004.