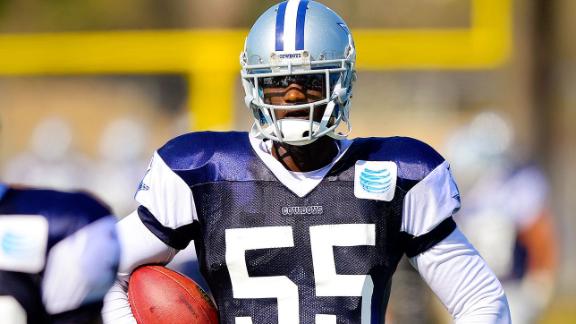 TUSCALOOSA, Ala. -- A witness reported seeing a car speeding away from the exclusive neighborhood where a suspicious fire gutted a mansion owned by Dallas Cowboys linebacker Rolando McClain, a police spokesman said Tuesday.

Tuscaloosa County Sheriff's Lt. Andy Norris said the vehicle could be a clue in the fire, which occurred Monday night, but investigators had yet to determine whether the blaze was accidental or set.

County detectives and investigators from the state fire marshal's office were on the scene of the fire, which destroyed a six-bedroom, five-bath brick house that was listed for sale on real estate websites at $1.5 million.

No one was home and no one was hurt. But authorities say the house is likely a total loss.

A crime dog will be used to determine whether something was used as an accelerant to start the fire, Norris said.

"Any time you have a vacant house go up, particularly one of that value, you have to consider it suspicious," he said. "Every house in that neighborhood is probably over $1 million."

A spokesman for the Cowboys declined comment on the fire, and McClain was not immediately available for comment. The player tweeted about the fire, however:

McClain, a 25-year-old native of Decatur, Alabama, listed the house as his home address in a court document filed in September accusing his ex-wife of failing to give him adequate visitation time with their 3-year-old daughter.

The house sat on four acres of land beside Lake Tuscaloosa, about 14 miles north of Tuscaloosa, where McClain played college football at the University of Alabama. The house had a three-car garage and a boat house on the shore.

McClain is now making an NFL comeback with the Cowboys after legal scrapes that include his conviction in July on charges including resisting arrest.