From the archives: Kevin Durant savors getting the better of LeBron James 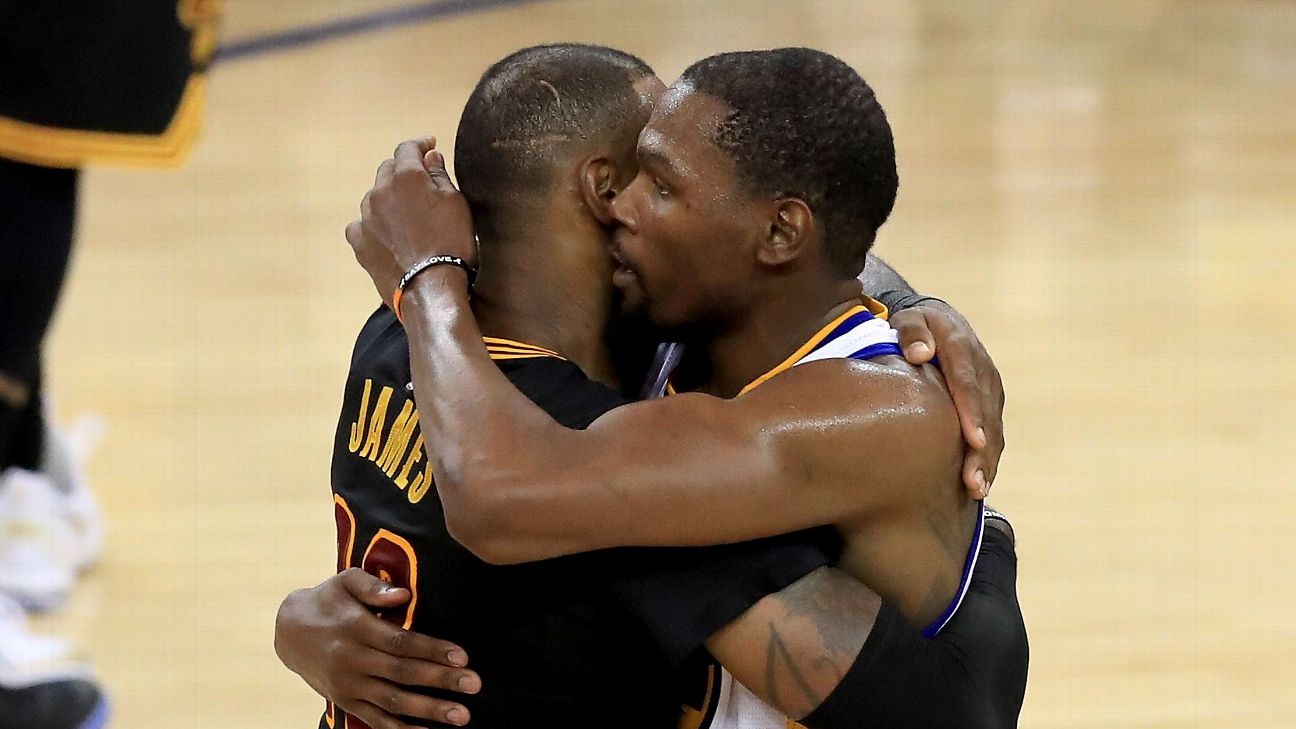 OAKLAND, Calif. -- This 2017 Golden State Warriors championship was as much a tribute to LeBron James as it was a triumph over him. The fact that the Warriors needed to add Kevin Durant to the core of a team that won 73 regular-season games and pushed James to the brink of elimination in the 2016 NBA Finals was just as relevant as the compulsion Durant felt to join this team in order to get a ring.


It's not as simple as "If you can't beat 'em, join 'em." When Durant and the Oklahoma City Thunder blew a 3-1 lead of their own to the Warriors in the 2016 Western Conference finals, Durant had still won two more games against Stephen Curry than he did against James the first time they squared off in the 2012 NBA Finals. Curry, he could beat. Probably should've beat. But they needed to align to defeat James and Kyrie Irving.

"LeBron was the driving force," a Durant confidant said of his league-changing decision to join the Warriors.

So Durant made the necessary choice. He left the only franchise he had played for since his rookie season in 2007-08. He endured the ridicule, the questions about his fortitude. He did it all for these moments, several of them really, building all season and throughout the 129-120 victory in Game 5. There was a slight fist pump to the crowd as Curry shot free throws. There were the half-skips, half-gallops after making big shots in the fourth quarter. There was the bend over near midcourt with less than a minute left in the game as he tried to inhale the magnitude of it all, while Draymond Green and Andre Iguodala exhorted him to keep playing and finish it off. (No one is more qualified to speak on the importance of finishing it off than the members of the 2015-16 Golden State Warriors).

Finally, after the confetti fell and the stage was hastily erected on the court and the Warriors and their family members celebrated, did you notice that Durant held the Larry O'Brien NBA Championship Trophy up with two hands, for much longer than the quick, one-handed pump of the Bill Russell award for the NBA Finals Most Valuable Player?

The big one was the more meaningful one. The slender Russell award felt like a foregone conclusion two games in, and it was voted unanimously by an 11-member media panel after Durant averaged 35 points, eight rebounds and five assists during the series. Durant outscored James in three of the five games. Durant had a bigger impact, even though James averaged a triple-double in the series. Durant was the story of Game 3, even though James and Irving combined for 77 points, because Durant scored the seven biggest points in crunch time.

And yet, in the aftermath, James was very much the story, at least in Durant's eyes.


"It feels great to win, but to go against somebody I view as like a rival, personally, is an amazing feeling to beat him," Durant said.

Durant knows how fleeting the victory might be, and the next phase is to "beat him to the gym" in July to get ready for next season. It was part of the immense respect Durant has for James, something he verbalized throughout the night.

James, asked to look back to winning his first championship with the Miami Heat against Durant in 2012, could appreciate how it must have felt for Durant to break through. But that's where the sympathy ended.

"Well, I'm not happy he won his first," James said, cracking a rare smile during his postgame news conference. "I'm not happy at all. But at the end of the day, from when I played him in the 2012 Finals to now, like I said, experience is the best teacher in life, and he's just experiencing and experiencing and experiencing. And it also helps when you are able to experience some things with this team, as well. He felt like he needed to reassemble and reassess his career and come here."

It sounded like the slightest bit of shade, perhaps even a bit of envy. James can't criticize too much, though, having bolted Cleveland for Miami to get his first championships, then leaving Pat Riley back in South Beach when it was obvious the aging Heat roster couldn't keep contending. During these Finals, James made sure to point out the differences between the tear-it-down-and-reassemble Heat team he formed in 2010 to the championship-close Warriors that Durant hopped aboard last summer.

That made Durant's move even less palatable to some than the scorned Decision. But Step 1 for Durant making it pay off was coming to acceptance with it himself. His mother, Wanda Durant, saw that breakthrough about a month after his July 4 announcement.


"I think he was a little nervous at the beginning, because it was such a change for him," she said. "He had such a storied history in Oklahoma. He was certain, but he was still kind of unfamiliar with the territory. Once he became solid in the decision that he made to come, I saw a difference in him. He has a freedom as a man, that only the journey of making a hard decision brings you to."

Durant also had to navigate the stardom-sharing duties with Curry. They never blended better than in the Finals, when Curry averaged 27 points, 9.4 assists and eight rebounds -- MVP-type numbers himself, if not for Durant. But Curry wouldn't have been on stage as a two-time champion if not for Durant. The Warriors needed someone who could outplay James, and Durant gave them that.

"This was what we talked about this whole year," Curry said, "realizing this goal and understanding how important we both would be to the equation, along with our teammates, and learned a lot about each other going through this journey."

When the Warriors finally lived up to their "Strength In Numbers" slogan in Game 5 with solid contributions from Iguodala and David West and even a couple of buckets from Pat McCaw, it was all the Cavaliers could do to keep the score within single digits.

The Warriors and Durant weren't just the perfect match -- they were necessary components. When we look back and assess the peak of James' career, the greatest testament will be that this is what it took to beat him. 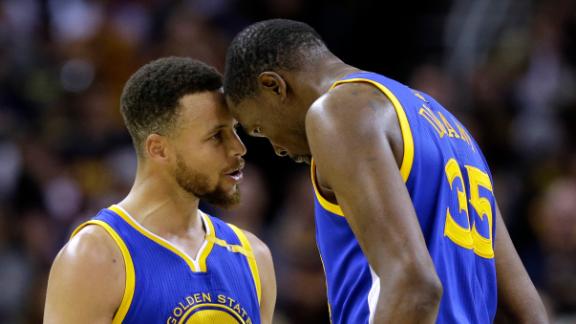