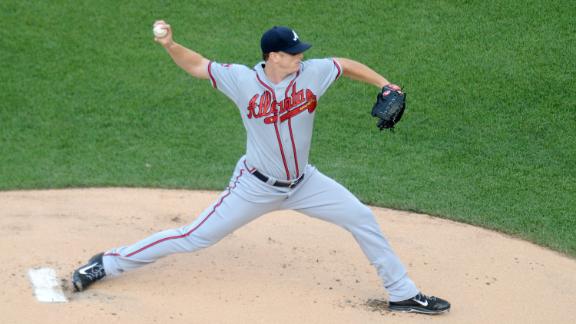 Floyd broke the olecranon -- the bony tip of the ulna that sticks out behind the elbow -- as he made the first pitch of the seventh inning, a curveball that Jayson Werth pulled foul, deep along the left-field line.

"It was fine until that last pitch," Floyd said. "I felt a pop. And it wasn't painful, at least."

Floyd will return to Atlanta on Friday to be examined by team doctors. The injury is so rare that neither he nor manager Fredi Gonzalez could provide a timetable for Floyd's return.

"In the big picture, I think he's going to be OK," Gonzalez said.

A similar injury ended the career of Detroit Tigers reliever Joel Zumaya in 2010.

Floyd flexed his arm awkwardly after making the pitch to Werth and was examined by the Braves' trainer. Unable to continue, Floyd left for reliever Anthony Varvaro.

Floyd was making his ninth start since recovering from Tommy John ligament replacement surgery on the same elbow, but Gonzalez said the two injuries are not related.

Floyd had been working on a two-hit shutout. He threw only 64 pitches, walking one and striking out six to improve to 2-2 and drop his ERA to 2.65 in his first season with Atlanta. His career record is 72-72 over 11 seasons with the Philadelphia Phillies, Chicago White Sox and Braves.

"I felt like I was getting better and better, so it's definitely disappointing," Floyd said. "Definitely not what I envisioned to happen. I haven't had any pain since the surgery."

"It's been a tough one, ever since spring training," third baseman Chris Johnson said. "But we've got to keep moving forward. Hopefully it's nothing too bad and we can get him back soon."