Geno Smith: Got the times mixed up 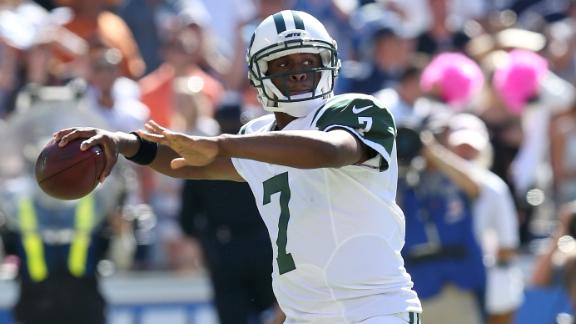 Geno Smith sat down to enjoy a movie in San Diego Saturday night when something just felt a little off. After a half hour he checked his phone and saw he didn't have cell service, so he went outside to call a teammate about when meetings were -- and realized his mistake.

"Mainly I just counted down instead counting up and got the times mixed up," Smith said via conference call on Monday. "So I guess you could say I was thinking I was on west coast time, I mean thinking we were on east coast time when we were actually on west coast time. That was just my mishap and it really had nothing to do with the time zones I'm aware of that but for that moment, I got that mixed up."

He rushed back to the team hotel for the meeting and arrived "panicking, hustling in," Jets coach Rex Ryan said, just after it had ended.

"Felt really bad about it, ended up apologizing," Smith said. "...Felt like I let a lot of people down, that's definitely not in my character."

Smith didn't want to discuss what the movie was that he went to see, and Ryan didn't want to talk about how many or which teammate joined their quarterback for the viewing party - or what the disciplinary process was for Smith other than saying there were procedures in place when it came to missing meetings.

"We'll deal with it internally and we have," Ryan said.

Ryan said he never thought of benching Smith for inadvertently playing hooky. Other players have made similar mistakes on west coast time. Ryan said his second-year quarterback made an honest mistake and will learn from it.

The Jets are now in a 1-4 hole with Denver on their way in this weekend, and then a short week following with a Thursday night game at New England to follow.

"(Denver) can't wait to get on the bus to come here," Ryan said. "We have to make some major improvements and we have to do it in a hurry."

Still, Ryan named Smith his starter for the Broncos game and Smith says he's up for it.

"I'm aware of what I can do on the field, so my confidence is sky-high," Smith said. "But I've got to produce. I've got to have the great games that I've done before but we've just been struggling as a team right now."

Last week Smith cursed at a fan as he left the field at MetLife Stadium after a loss to the Lions and was later fined $12,000 by the league. Smith appeared terse during the week when asked if Vick should be inserted in the game to provide a spark. Vick was indeed put in the game in San Diego, but there wasn't much of a spark.

Smith has been fortunate that his coach and teammates still support him through these growing pains.

"I think we all make mistakes as we go along," center Nick Mangold said. "And I think it's just a factor of owning up to it and make sure it doesn't happen again. I believe he understands that the quarterback, as the leader, that those things are unacceptable and in the future, I don't expect that to come up again."

Geno Smith, Teammates Missed Meetings
Adam Schefter discusses the news that Jets QB Geno Smith and teammates missed meetings Saturday night because they went to see a movie and didn't make it back in time.