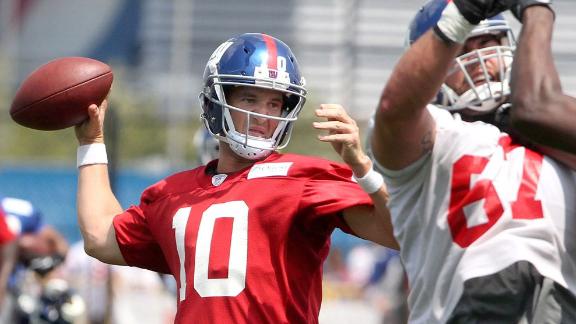 EAST RUTHERFORD, N.J. -- The New York Giants are setting lofty goals for their new offense in 2014 as new quarterbacks coach Danny Langsdorf has challenged Eli Manning to complete 70 percent of his passes.

"It hasn't been done very often, so that's the ultimate goal," Langsdorf said before Giants practice Monday. "I think it's been done eight or nine times, maybe? That's an impressive statistic in the history of the league. So that's what we're gunning for, that 70 percent."

Manning's career completion percentage is 58.5. His highest mark for a single season is 62.9 percent in 2010, and it has dropped each year since -- all the way to 57.5 last year, when he led the NFL with 27 interceptions against only 18 touchdowns.

After last season, the Giants changed offensive coordinators and have installed a new offensive scheme.

And Langsdorf knows Manning has the list, because he made sure to go over it with him this offseason.

"He's well aware of who's done it in the past and what the system can get you in terms of completion," Langsdorf said. "So we're trying to focus on that and really trying to do a good job of taking care of the ball and hitting open receivers."

When Langsdorf refers to "the system," he's talking about the new offense that the Giants are installing under first-year offensive coordinator Ben McAdoo. The passing game is likely to rely more on short, higher-percentage passes than the old Kevin Gilbride-coached offense did, and the theory is that Manning's completion percentage will rise for that reason alone.

A passing game that relies on shorter throws would seem to help any quarterback. And guys like Young and Montana in their 70-percent seasons were working in West Coast offenses whose principles are ancestors of what McAdoo helped run when he was in Green Bay.

"I think that number has always been used by this offense as a standard," head coach Tom Coughlin said of the West Coast-style offense being implemented by the Giants. "Not that it's been achieved very often, but it's a goal."

As Manning pointed out Monday, there's still a long way to go before the Giants even feel as though they know how to operate the new scheme.

"I think guys are just starting to understand the tempo of the offense, the timing of the routes, the kinds of plays we can get into, and I think it's coming faster for the quarterbacks also," Manning said. "We've got to keep working, and I think we're getting more of the install in, but there are still more plays, more concepts to be put in, so we've still got some ways to go."