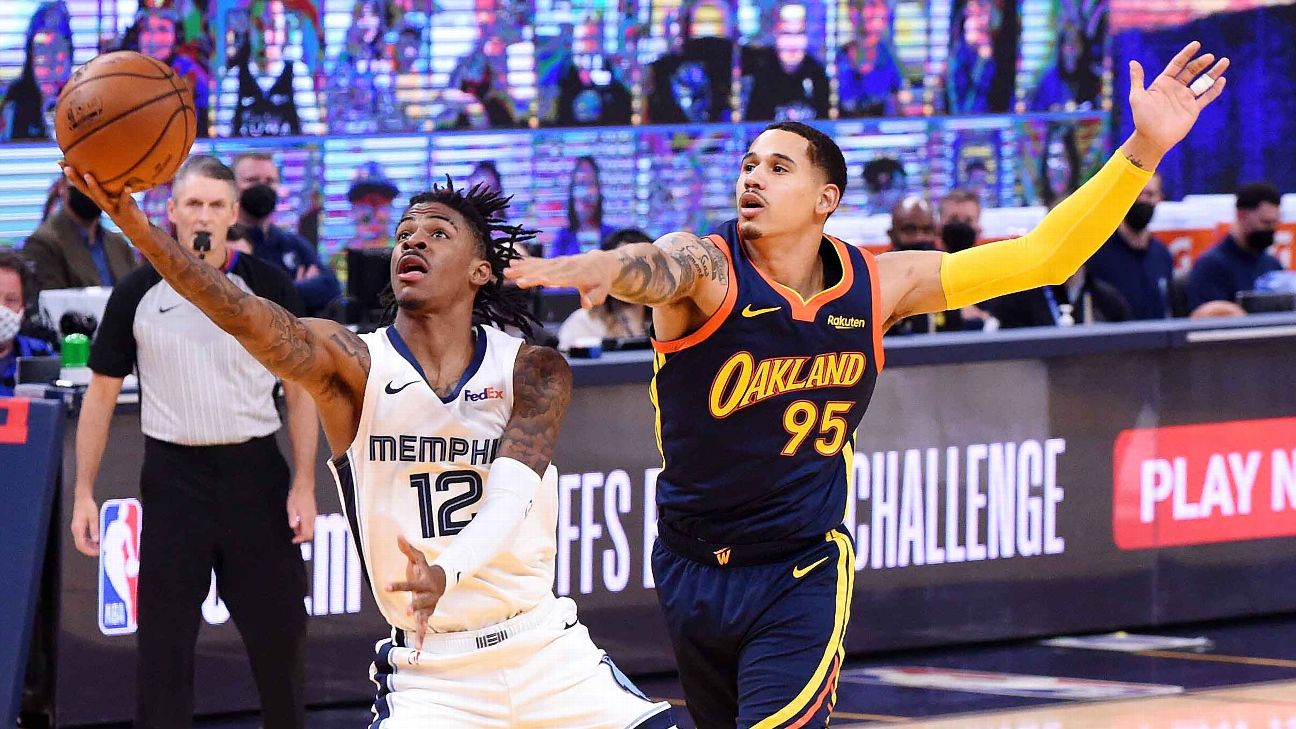 As Ja Morant responded to a question during his postgame virtual media availability Friday night, Dillon Brooks, seated to Morant's right, punctuated one of his Memphis Grizzlies backcourt partner's answers with two words.

"Top five," Brooks blurted, a reference to Morant's recent declaration that he ranked among the NBA's five best point guards.

Morant, a 21-year-old blossoming star point guard, had 35 points, 6 rebounds, 6 assists and 4 steals. More important, he delivered with the game -- and the season -- on the line. Morant scored 15 points in the fourth quarter and overtime, including a pair of driving floaters in the final minute to ice the win and earn the right to face the Western Conference's top-seeded Utah Jazz in a series that starts Sunday in Salt Lake City.

Morant isolated against Curry, drove to his left and pulled up at the dotted line in the lane to swish a floater that gave the Grizzlies a three-point lead with 48.3 seconds remaining. After a Warriors turnover, Morant let the shot clock tick down before getting to the same spot, driving against Juan Toscano-Anderson from the left wing before spinning into the lane and sinking the dagger floater with 4.5 seconds remaining.

"I love pressure, honestly," said Morant, who assisted on backup center Xavier Tillman's go-ahead corner 3 with 1:27 remaining. "I feel like my game rises to another level."

The Grizzlies' win at the Chase Center was an upset, but Morant's spectacular effort couldn't be considered a surprise. He has a proven track record of performing in high-stakes games, such as his triple-double to lead 12th-seeded Murray State to a March Madness upset win in 2019 and his 35-point, eight-assist outing as a rookie in last season's thrilling play-in loss to Damian Lillard and the Portland Trail Blazers.

The Warriors dared Morant to make them pay with his perimeter shooting, which is his biggest weakness as a 30.3% 3-point shooter this season. He did, going 5-of-10 from 3-point range Friday night. Then Morant beat Golden State down the stretch with his biggest strength, attacking off the dribble and finishing.


"He rose to the occasion," Memphis coach Taylor Jenkins said. "He's built for these moments. I'm glad that he played to that level that we expect and he expects of himself."

As a result, the Grizzlies became the youngest playoff team since the 2010-11 Oklahoma City Thunder, who featured future MVPs Kevin Durant, James Harden and Russell Westbrook, all age 22 or younger. Memphis' roster has an average age of 24.8 years old, and the Grizzlies' total playoff experience (112 games) is equal to Curry's alone.

"We've created a winning culture," said Brooks, who has played all four of his NBA seasons for the Grizzlies, making him the longest-tenured player on the Memphis roster. "That's the main thing. Every single year, we're going to get better, but we're ready for Utah."

The Grizzlies' guards emphasized that they aren't satisfied with sneaking into the playoffs.

"The job's not finished," Morant said. "We're not trying to be done just making it to the playoffs. We're trying to make a deep run." 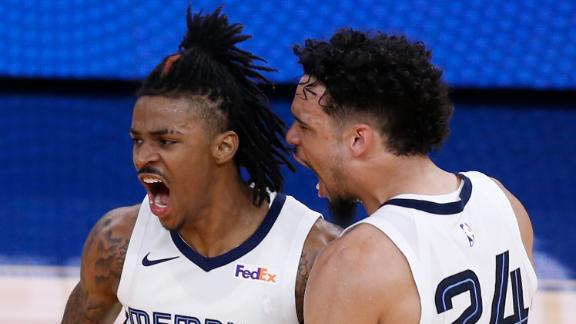